'These people have big hearts': Displaced Ukrainians in Saskatoon thankful for English classes

'These people have big hearts': Displaced Ukrainians in Saskatoon thankful for English classes

With thousands of displaced Ukrainians now calling Saskatchewan home, individuals in the community are mobilizing to help them learn English.

Olena Bodnarenko fled the Russian invasion in May. She left her husband behind in Kyiv.

Bodnarenko didn’t want to leave, but an injury made it necessary.

“I have broken leg. I broke it in Ukraine before the war,” she told CTV News.

Because of that injury, she says she didn’t want to risk being a liability if a quick evacuation to a bomb shelter was necessary. She left with her daughter and came to Saskatoon.

“It’s very hard for me to be in Canada when my native people stay in Ukraine,” she says.

Now Bodnarenko is trying to make the best of her circumstances, learning more English to help her get by in her new home.

“I try to speak because I can understand most of all, but I can’t speak,” she said.

She’s in one of four classes, all at different levels being offered free of charge for newcomers.

“We have gone from not being able to introduce yourself to be able to say this is my name, this is where I’m from. Today we talked about more professions and learned more words,” Olesya Hursky, volunteer instructor told CTV News.

Hursky and the other instructor Laurianne Gabruch came up with the idea to help Ukrainians adjust.

They and other volunteers give up their Saturdays and Tuesdays to help out and the effort is not lost on these students.

“These people have big hearts. It’s very hard work but they make the process as easy as possible,” Bodnarenko said. 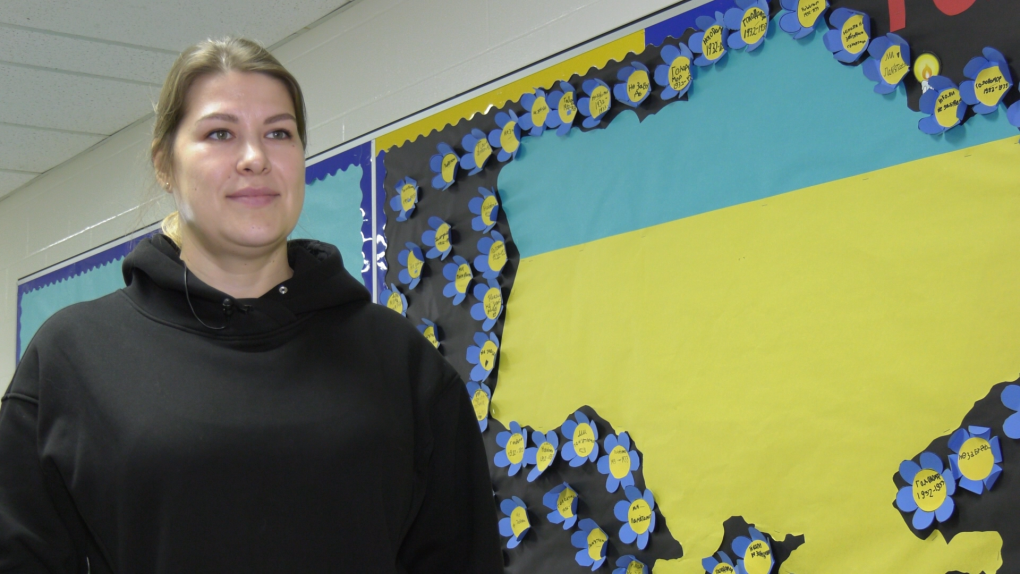 It’s not always easy thanks to the many silent letters in English words, which Bodnarenko admits are the most difficult concept to grasp.

“It is not clear why there are letters in some words that are not pronounced. I don’t understand this.”

She says the Ukrainian language is very phonetic where all letters in words are heard so the idiosyncrasies of English are a big adjustment for the group.

Many of the roughly 50 newcomers taking the classes hope to learn English well enough so they can get a job and support themselves as they navigate their new homes.

“It’s nice to see them opening up and relaxing and be able to say what they want to say and not having to worry about how you’re being perceived and whether you’re saying it correctly or not,” Hursky said.

Bodnarenko is happy that her English has improved in the six weeks she’s been taking the class, but her sights are still set on returning to her husband as soon as possible.

“I hope the war stops in my country and I really want to go home.”

Biden says he gave the order for Chinese balloon shootdown

President Joe Biden said on Saturday that he ordered U.S. officials to shoot down the suspected Chinese spy balloon earlier this week and that national security leaders decided the best time for the operation was when it got over water.

How to stay safe in extreme cold: Recognizing the signs and symptoms of frostbite, hypothermia

China balloon: Many questions about suspected spy in the sky

The massive white orb drifting across U.S. airspace has triggered a diplomatic maelstrom and is blowing up on social media. A look at what's known about the balloon crossing the U.S. and what isn't.

Marit Stiles has been confirmed as the new leader of the Ontario NDP after a majority of party members voted in favour of the lone candidate.

Eyes on the sky as Chinese balloon shot down over Atlantic

Eyes were locked on the skies Saturday as a suspected Chinese spy balloon passed over the U.S. Eastern Seaboard -- where local authorities warned civilians against taking potshots with rifles -- before it was shot down when it drifted over the Atlantic Ocean.

Dozens of Russian and Ukrainian prisoners of war have returned home following a prisoner swap, officials on both sides said Saturday.