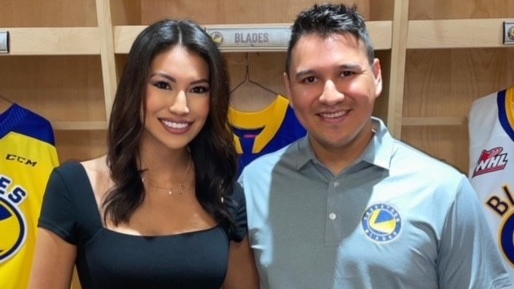 Ashley Callingbull, left, and Wacey Rabbit are the newest hires of the Saskatoon Blades. (Submitted photo)

“I’m really excited,” he said. “There’s just so many emotions going through my head.”

Rabbit spent four seasons with the Blades from 2002-06 before winning the 2007 Memorial Cup with the Vancouver Giants. He was born in Lethbridge and is a member of the Kainai First Nation. His hope is to help give back to the Saskatoon Indigenous population.

“The province has grown the game for Indigenous players. I just want to come back and be a part of that and help in any way I can,” Rabbit said.

Rabbit says having an Indigenous person on the bench gives Indigenous people someone to identify with. He remembers when he was younger watching fellow Indigenous player Shane Peacock play for the Lethbridge Hurricanes.

“Seeing someone that kind of came from the same background that looked like me, that meant the world to me,” he said.

Joining him is his wife Ashley Callingbull, a 2015 former Mrs. Universe pageant winner, who is from Enoch Cree Nation. She will be serving as a brand ambassador for the Blades and the Saskatchewan Rush.

“I want to create more partnerships and more opportunities for other Indigenous peoples,” she said. “I can actually make a difference because the work that I do is usually with kids that are at risk or women that are escaping domestic violence.”

She hopes to be talking at schools and at different shelters, organizations, and within the community.

University of Saskatchewan Indigenous studies professor Priscilla Settee says she was thrilled when she heard the news of the couple being hired by the Blades.

She said they'll serve as role models for upcoming generations and their hiring could help dispel racism, which she says exists in the game of hockey.

After a series of interest rate hikes implemented by the Bank of Canada, housing markets are now facing a 'significant' correction. CTVNews.ca spoke to Canadians who are now struggling to make the goal of purchasing a home, or selling one, a reality.

A high-ranking B.C. officer used police resources to conduct at least 92 searches on his ex-girlfriend and her family while stalking her over a period of five years, according to documents exclusively obtained by CTV News.

Power has been restored in Toronto's downtown core after a widespread outage caused major disruptions in the city Thursday.

A Brampton, Ont. media personality who was attacked with a machete and axe in his driveway will need months of physical rehabilitation to recover, a close friend says.

Man who tried to breach FBI office killed after standoff

An armed man clad in body armor who tried to breach the FBI's Cincinnati office on Thursday was shot and killed by police after he fled the scene and engaged in an hourslong standoff in a rural part of the state, the Ohio State Highway Patrol said.

It’s been seven days since 74-year-old Lois Chartrand went missing while mushroom picking in the forest north of Smeaton, Sask.