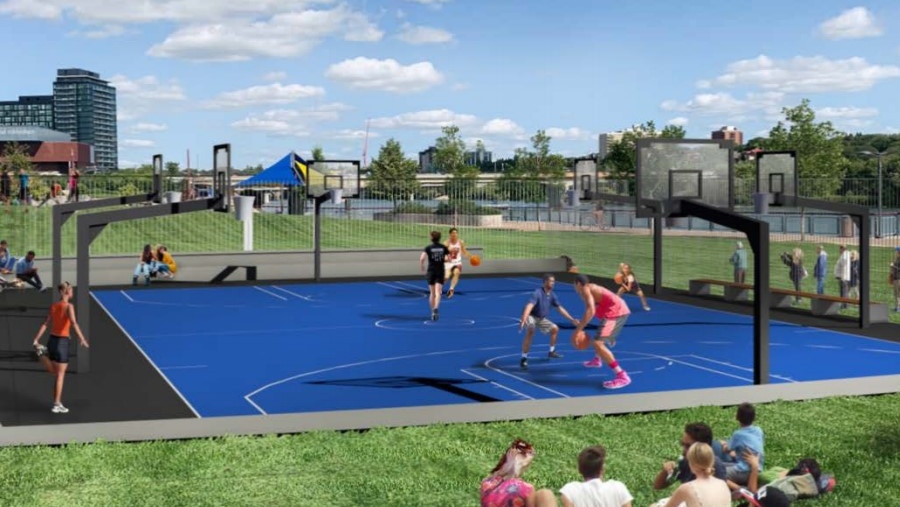 An artist rendering of what Hoist the Hoops plans to deliver to River Landing in the near future. (City of Saskatoon)
SASKATOON -

A full size feature outdoor basketball court could be coming to River Landing between the outdoor exercise equipment and the Chinese pagoda along Saskatoon's riverbank, pending approval from a city committee and eventually city council.

“We want to see this built because we believe it will bring people together,” said Hoist the Hoops co-founder Michael Linklater. “It will be something all citizens of Saskatoon can be proud of and it will provide all basketball players a central and safe location to have top-notch amenities to play a sport they love.”

On Monday, the city’s standing policy on planning, development and community services will discuss the half-million dollar project, and decide if the city’s elected officials support the city taking on the project.

“A lot of the courts around Saskatoon right now are not regulation and there’s a lot of issues with the courts,” Linklater said, referring to uneven backboards, uneven playing surfaces and irregular lines painted on outdoor courts. “When it comes to an outdoor court we don’t really have what we need.”

In a report to the committee, the city’s administration said it has reviewed the project and supports Hoist the Hoops subject to a few conditions dependent on Monday’s meeting and a city council meeting later this month.

Those conditions include city council approving the project, accepting a capital donation from the City to kickoff ongoing operations of the outdoor court, Hoist the Hoops achieving its project fundraising goal before construction begins and the City and Meewasin Valley Authority approving the final design.

Since the idea was pitched in August 2019, Saskatoon Minor Basketball Association has voiced its support for the project and according to the city’s report, the association is prepared to collect, manage and administer the capital donations on behalf of Hoist the Hoops. The City said in its report it would work with Saskatoon Minor Basketball to create a funding agreement for this project.

According to the City, the basketball court is estimated to cost $400,000 but with additional detail design, project management, site survey and contingency costs, the project has grown to $530,000. The city estimates the basketball court will cost about $10,000 a year to run.

Linklater said once Hoist the Hoops has collected its fundraising goal the group will donate what’s collected to the city to get shovel in the ground for this project.

What is the Canada-U.S. Safe Third Country Agreement?

The Supreme Court of Canada is set to hear a case brought by several human rights organizations seeking to overturn Canada-U.S. Safe Third Country Agreement. CTVNews.ca breaks down what the agreement entails.

Canadian officials warn: Turkeys at U.S. border might be turned back

Ahead of Thanksgiving Day, the Canadian Food Inspection Agency is reminding cross-border shoppers that raw poultry or poultry by-products can’t be brought into the country from the U.S. due to ongoing avian flu outbreaks.