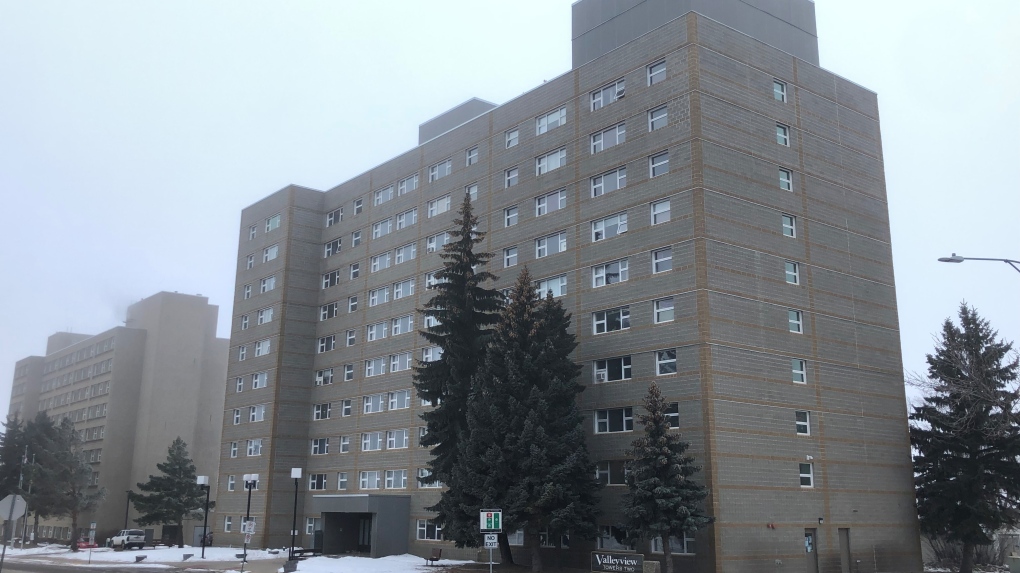 SASKATOON -- For years, Valleyview Tower Two in North Battleford was filled with mostly older adults - people who socialized with each other, according to resident Darryl Mills.

But lately things have been going downhill, he said.

“The fact is it’s been an absolutely disgrace for the past few years. It’s been terrible what’s gone on, in the past we never had police come by like they do now,” said Mills.

Mills, a former building manager, said that changes brought by management at the tower has seen a wave of new residents, many of which Mills fears would not meet proper lease conditions.

With them came the parties, he said.

“There are people running around without masks. People coming in and out of the building at will. I’ve experienced this myself and I’ve had dozens of people tell me how they go to come in the front door and someone is there waiting and grabs the door out of their hands,” Mills told CTV News.

Mills claims that since new management took over there has been a host of new problems in the building such as theft, human waste in the elevators on multiple occasions, and even harassment.

“There’s one lady I know in particular who lives on the fifth floor, where a lot of trouble comes from. She’s had people in the middle of the night banging on her door asking for sex,” said Mills.

“She’s a senior and she’s got these young punks knocking on her door, being very vulgar about it.”

Mills said the woman did reach out to the office and police as it was not an isolated incident.

Roger Parenteau, executive director of housing operations with the Saskatchewan Housing Corporation, released a statement on behalf of the North Battleford Housing Authority.

“The Battlefords Housing Authority has made significant, long-term efforts to address concerns. This has included one-on-one meetings with tenants, an investigation of concerns raised, and then the development and implementation of a comprehensive plan to improve building safety and culture,” Parenteau said in the statement.

“This work has seen successes in addressing concerns and enhancing security for tenants in the building. Efforts are ongoing, and we are confident that tenants and staff will continue working together well to create a safe and positive environment.”

According to Mills, many of the problems stem from the guests of new residents, and not necessarily the people who live in his building,

He said that things can be done if the building enforces the lease agreement.

“It says it right there in the lease. It says that if your guest misbehaves you will be evicted, but for some reason the housing authority doesn’t want to do a thing about that.”

Les Turner has lived in the building for years and shares similar concerns with Mills. He said he wants to move out but he simply can’t afford it.

“Back when I first moved in here it wasn’t really bad, but all of a sudden this new guy takes over and they’re letting anybody in here.”

Turner said the partying happens almost every weekend, with crowds gathering in the front lobby waiting for someone to let them in, often times with alcohol and not wearing a mask.

Turner said he also heard about the women in the building being harassed by people who were partying in the building, and he said that a lot of the older people there simply don’t feel safe anymore.

One of those people is Natalie Berrecloth who has lived in the building for four years. She said that the building used to be a big community, with game nights, dinners together and talking in the halls.

“I feel very unsafe. I don’t even go to the manager any more, they don’t do anything about it. I just open the door and I tell them ‘get out.’”

Berrecloth said she misses the way the building was and now she dreads even walking up to the building’s front door or using the elevators.

“It’s got to come to a halt, and I don’t know which other way to turn. I just want peace and quiet and make the management understand that there are problems, big problems.”

Mills and Turner both acknowledge steps taken to address the situation, such as the hiring of a security guard and the placement of cameras, but they said with the way the building is managed, it isn’t making much of a difference.

“We’ve had one guy who had a $3,500 bike stolen right in front of the camera and the management here said they couldn’t tell who stole it,” said Mills.

Turner claims that requests to management to see footage from the cameras is always denied, making the cameras all but useless in his eyes.

Turner said the addition of the security guard has helped, but the guard is only there for a few hours on the weekend, and he said the partying and vandalism isn’t always confined to Saturday and Sunday.

“He throws them out, he doesn’t care, he gets rid of them right away. That’s the kind of security we need here, but not just three hours a night on the weekend. Those guys know what he’s doing, it’s all week they party here,” he said.

Residents CTV News spoke with said they hope to see a difference in the way the building is managed.