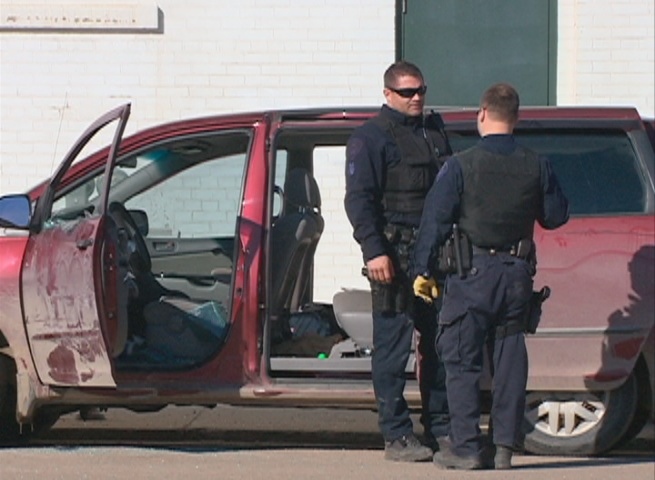 Saskatoon police stand in front of a stolen van used in an attempted getaway Friday afternoon.

A 21-year-old Manitoba man who rammed a police vehicle in an attempted getaway Friday afternoon is facing several charges.

The man was arrested in downtown Saskatoon near 24th Street and First Avenue after being pursued south of the city by RCMP. The chase was called off as the stolen Toyota van approached city limits, but just before 4 p.m. a canine unit spotted the vehicle downtown.

Police surrounded the van, which was occupied by two people, before the driver rammed a police cruiser in an effort to escape.

He didn’t get far, however, as two officers on foot smashed the window and pulled the driver out.

The man was charged with possession of stolen property, two counts of assaulting a police officer, driving while disqualified and dangerous operation of a motor vehicle.

The passenger, a 23-year-old woman, was charged with possession of stolen property.

Police said in a media release that the investigation is ongoing and that additional charges may still be laid.