A plume of thick, black smoke could still be seen rising from the wreckage as drivers were diverted from a stretch of Highway 16, west of Lanigan.

According to a news release from CP, the train derailed around midnight local time and no injuries were reported.

Melanie Loessl could see the flames from her driveway.

“It was horrible when I looked out the window and saw all the flames and everything engulfed. I actually thought it was my daughter’s place that was involved because we both live on the same driveway,” Loessl told CTV News.

She was unable to leave her home because emergency crews blocked her driveway.

Loessl said firefighters had knocked on her door, informing her of the derailment, and warned of a possible evacuation.

The railway said that according to initial reports there had been no impact on any local waterways, adding that crews would work to ensure the area is cleaned up and restored. 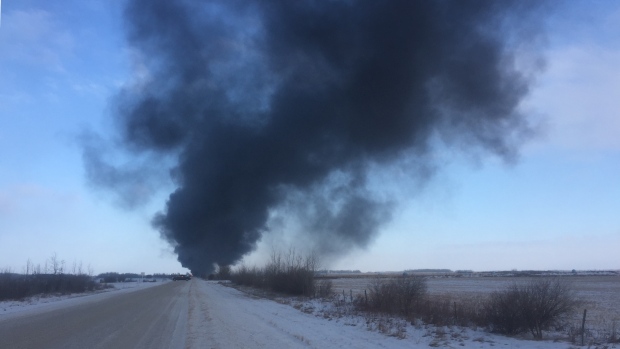 There was no immediate word on how many rail cars were involved and CP noted that an investigation was underway into the cause of the derailment.

Police said the incident could result in an extended traffic blockage, and that an alternate route was available south of Plunkett on Highway 365 toward Watrous, then north along Highway 668 to Guernsey.

RCMP are encouraging drivers to avoid the area.

The Transportation Safety Board of Canada said its sending a team of investigators to the site.

In an emailed statement sent Monday afternoon, the provincial government said the Saskatchewan Public Safety Agency is responding to the incident with teams focusing on fire suppression.

It's estimated the fire could take another eight to 10 hours to fully extinguish, the statement said.

Saskatchewan's Ministry of Environment is monitoring air quality in the area. There are no advisories at this time, according to the province.

With files from CTV Saskatoon's Laura Woodward and The Canadian Press.