"I think the plan is a good plan. The plans put forward by the school divisions are comprehensive," Gord Wyant said.

Wyant said all decisions are made under the Chief Medical Heath Officer's direction.

Currently, schools will open under the plan's Level One threshold with no rules for masks.

On Friday, Wyant said the government is considering mandating masks under Level Two of the back-to-school plan.

“There are conversations going on with health care professionals and education professionals to determine if that [level] will change,” Wyant told reporters at a press conference at Saskatoon’s cabinet office.

Under the province's plan,  released Tuesday,  masks were listed as a possibility under a Level Two scenario, but not specifically mandated.

Protests were also held at other MLA offices across Saskatchewan and at the legislature. 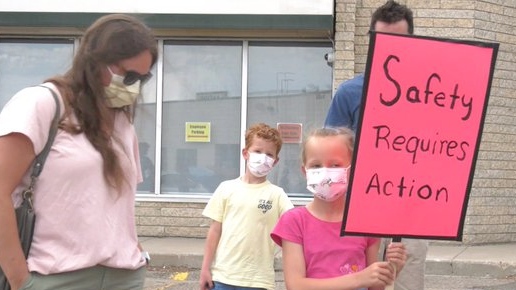 “Just toss us in and wait and see is not a strategy,” teacher James Diakuw told CTV News.

Diakuw held a sign that read, ‘Dammit Gord, I’m a teacher not a doctor’ outside Wyant’s office.

The Saskatchewan Medical Association (SMA) met with Dr. Saqib Shahab on Thursday and urged the government to set higher safety standards at schools.

“The SMA is urging more caution when schools reopen this fall,” the association’s news release said.

While the government isn’t currently mandating masks at schools, six million masks have been ordered for schools in Saskatchewan.