'It overtook our anger': Saskatoon man with autism had iPod stolen, friends and family rally to replace it

SASKATOON -- Kelly Desjarlais loves to take the bus to Tim Hortons and Sobeys, buying himself an iced coffee and his mom some flowers, but one day Desjarlais had to deal with something he never expected.

Desjarlais has autism and ADHD and loves to put on his music to drown out the noise of downtown or others on the bus, slipping away to his own world filled with Christmas music or old country hits.

On Aug. 7, he was at the downtown bus terminal, waiting for his ride when someone came up to him, wanting something that he had.

"He was sitting there waiting for his bus. Someone walked up to him and asked for his iPod and headphones," Desjarlais’ sister Jennifer Pritchard said, recalling the incident.

"He was scared, I believe he was silent. They just grabbed it, grabbed it from his head and took off.”

Desjarlais has a hard time talking about the incident, but said it won’t stop him from his trips to Tim Hortons or Sobeys, but now he’s worried.

"I am going back downtown, I’m just scared to go back," Desjarlais said.

"Lots of riff-raff downtown. I don’t like late nights. Late nights are too bad.”

Desjarlais’ other sister, Charity Rae, made a post to Facebook, explaining the situation to friends and family.

It didn’t take long for the post to be shared all over Saskatoon and even across the country.

"Quebec, B.C., Alberta, his post was shared all over the place. Someone from B.C. contacted my sister and wanted to donate a tablet,” Jennifer said.

Jennifer said that they were getting all sorts of offers from people wanting to give money or a brand new iPod.

In the end, Jennifer said they got enough to replace the iPod and told everyone that they received enough donations, but more still kept coming.

"My sister is still getting emails, she’s telling them thank you so much but we replaced Kelly’s stuff," Jennifer said. 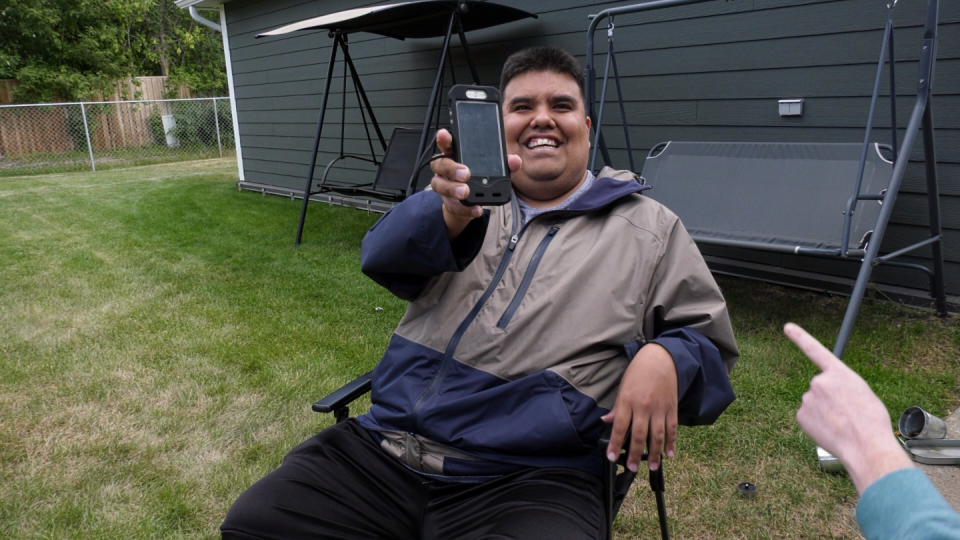 The Sobeys on 8th Street in Saskatoon heard about what happened to Kelly and immediately started thinking of how they could help.

"When we got the news we recognized Kelly right away and we said, ‘Okay, us as a team, we need to take care of him. How are we going to do it?’" Varsity Commons Sobeys manager Loretta Friesen told CTV News

"We reached out and wanted to know what we could do to help support Kelly and in the end we were able to buy him some wireless headphones for his new iPod.”

Friesen said she and her staff see Desjarlais all the time when he comes in to buy his mom flowers, and she said he is basically family to the employees there and he’s always lifting their spirits.

"He is always happy, he engages with everyone, he says hello to everyone he loves to make jokes, he always has a fresh joke for us every morning, so it’s always really positive," Friesen said.

"During everything we’re going through right now, honestly Kelly is a breath of fresh air when he walks in.”

Jennifer said that it’s hard for her and her family to walk anywhere around town with Kelly without someone recognizing him and trying to talk to him.

She said that he loves people and loves to make new friends, and seeing all the positive feedback might have taken her aback, but Jennifer said that she isn’t all that surprised because of how well Desjarlais treats others.

Jennifer said initially they were angry at the people who robbed her brother, but after seeing the support come in from all over, she dropped that anger for something better.

"We were so upset about what happened, but when people started coming forward it overtook our anger, and we were just like ‘wow, this is love, this is great," Jennifer said.

Desjarlais now has a travel iPod to go along with his fancy new iPod which he will be keeping at home just in case.

Desjarlais and his sister said they are grateful to everyone that came forward to help out.