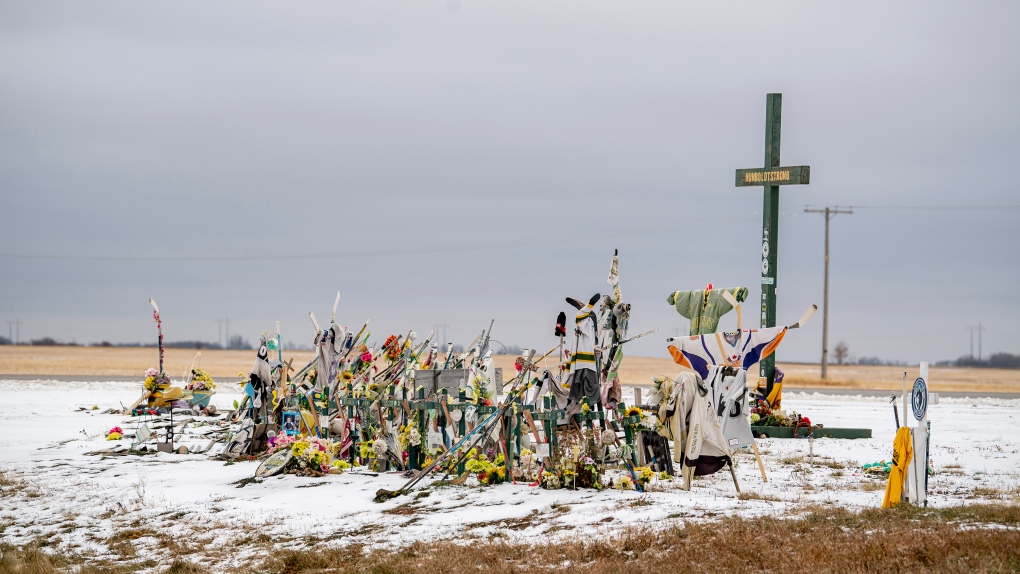 TISDALE -- The makeshift memorial of hockey sticks, jerseys, flowers and crosses is weathered and worn by time. The only thing vivid are the memories and the pain.

It was April 2018 when the driver of a semi-trailer truck blew through a stop sign and and into the path of a bus carrying the Humboldt Broncos junior hockey team at an intersection 30 kilometres north of Tisdale, Sask.

Discussions are still going on 2 1/2 years later about how best to permanently honour the 16 people killed and 13 others injured by the crash.

"It's a tough corner, man," says Myles Shumlanski, who lives less than a kilometre from the site. His son, Nick, was the only person to walk away from the crash with no physical injuries.

"There's people who live out beside me who still can't drive by it and they weren't even involved with it."

But wind, snow, rain and the bright Saskatchewan sun have taken their toll, bleaching out colours to a dim wash of what they once were.

A committee of Broncos parents is working on plans to build a permanent memorial at the site. There's no timeline, but some would prefer to see it sooner rather than later.

"It's kind of disappointing in a way. You'd think that you'd be able to move things along a little quicker," said Kevin Matechuk, whose son, Layne, spent a month in a coma after the accident. Layne has no memory of the crash or the six months that followed and still suffers from a serious brain injury.

"I kind of pictured having the faces and a small bio of all the ones that passed, and something about the survivors as well and everybody involved in the accident. There should be some sort of monument put up there for sure."

It took 30 years for a highway memorial to be erected at the site of the Swift Current Broncos bus crash that killed four players in 1986. The two-metre granite structure is in the shape of a four-leaf clover with each player featured in one segment.

"We don't want to wait 30 years. We still want to be around. I'd like to see almost a little museum to walk through and stay warm kind of place, but who knows?"

The mayor of Tisdale said the crash has had a lasting impact on the community, where hockey is a way of life. Fire and ambulance crews from the town were the first ones to respond.

"On the fire department, we had some young kids, 20-some years old, and to end up there. They all left here not knowing what happened. Not everyone could handle that," said Mayor Al Jellicoe.

"They've been talking about making something more permanent, which I hope they do. It's surprising the number of vehicles that (stop) there."

A group of parents visited the site and gave it a cleanup earlier this year.

Michelle Straschnitzki, whose son, Ryan, was paralyzed from the chest down, has only seen pictures of it.

"It's kind of become a little weather-worn, but there's some beautiful touching pieces there that should be preserved," she said.

"It should be somewhere where people can still pay their respects and read about it, something that's also very personal about the team."

Shumlanski said a permanent memorial isn't going to change anything.

"People from all over the world came and put stuff at those crosses and sometimes it looks a little messy, but you know what? It means a lot to the people who lost their families there," he said.

"It's a spot that, no matter what, it's always going to be there. It's not going away."

This report by The Canadian Press was first published November 1, 2020.