SASKATOON -- Bob Rutherford needs no introduction to a knitting machine.

"I asked the question, have you ever been cold, just think about being on the streets of Saskatoon in the winter and not having warmth," said Rutherford, a local senior citizen and long time volunteer.

For nearly 10 years Rutherford and a team of seniors have been running Socks By Bob, knitting and sewing socks, toques and neckwarmers to give to homeless shelters across western Canada.

Within the last year, Rutherford started making toques on his old machine and is learning how new 3D print technology can help him make even more.

After needing some new parts for his machine, Rutherford turned to Wave of the Future 3D and asked them to redesign a cylinder.

"I'm amazed, you know I never thought of that."

The company, which works on everything from automotive and farm equipment parts, to models and decorations, went to work on Rutherford's request.

"Mr. Rutherford came in and he had originally made these mechanisms by hand himself and it took him about nine months to do," said Lance Greene, project developer at Wave of the Future. 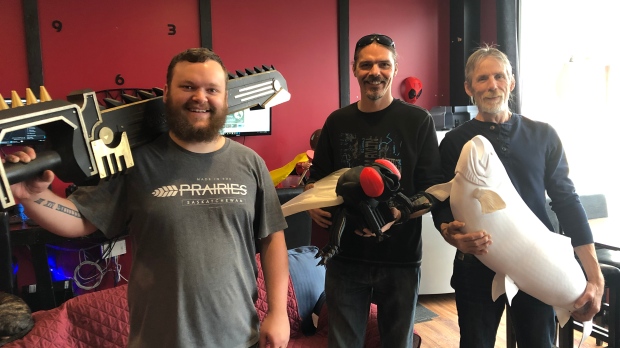 "He came in with a new design he wanted so that rather than making socks he could make toques as well," said Greene.

"He brought in his original that he spent nine months working on, I reverse engineered it and redesigned him a new one with new parameters in about two weeks."

Wave of the Future is making the parts for Rutherford's machine for free knowing their work is contributing to his cause.

"You know, Bob can expand and help more people throughout Canada and if we can donate our time, more people should do that and help him out on other aspects," said Randy Janes, owner of Wave of the Future.

"They deserve a tremendous amount of recognition," said Rutherford. "I'd like to have one in my house, I could make a lot of things."

The new part they created has helped him make more than 800 toques in less than a year, 500 more than he did last year.