'I'll miss all the animals': Saskatoon zoo has big boots to fill as manager leaves 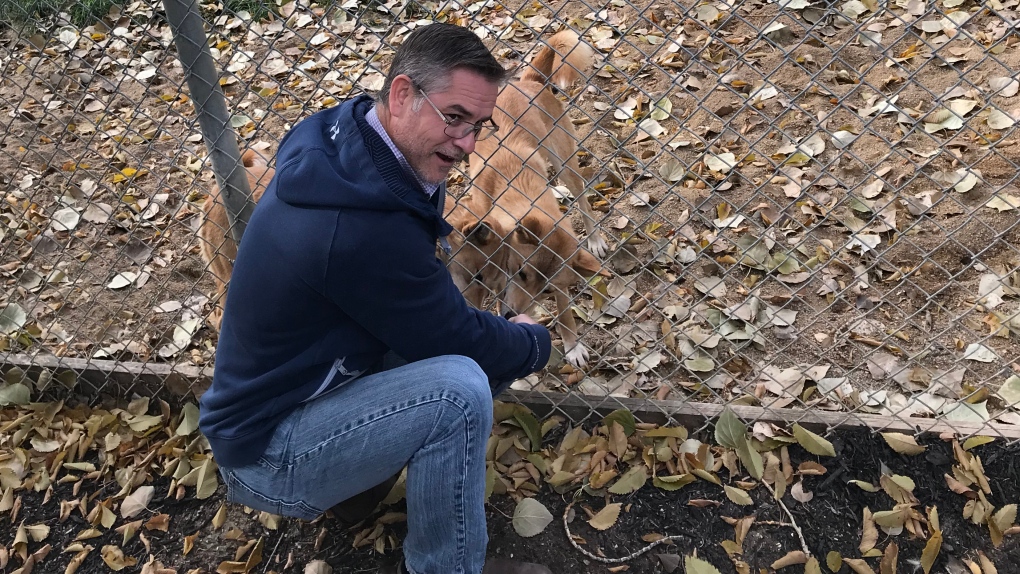 SASKATOON -- Tim Sinclair-Smith is going back to his home country of Australia next month after three-and-a half years changing the Saskatoon Forestry Farm Park and Zoo.

Under his watch the zoo saw new arrivals such as komodo dragons, dingoes and meerkats, in addition to expansions and instillations to exhibits such as the hockey rink glass around the dingo enclosure.

Sinclair said he believes the concept of the zoo is outdated and that it’s necessary to expand the size of enclosures and turn zoos into sanctuaries.

“That’s what I like to do, that’s my niche,” Sinclair-Smith said. “I like to come in and bring new things for the public to see. New education opportunities, new opportunities around research and conservation.”

Sinclair was working in China before getting the call to come work for the zoo in Saskatoon.

He has also worked in Kenya, Cameroon, Australia, and multiple places in Canada.

Sinclair-Smith said prior to receiving the job in Saskatoon he had plenty of experience with Canada and Saskatchewan, but that didn’t make living in a cold environment any easier.

“I still don’t quite understand who was travelling through Canada back in the day and they stopped here, and knowingly went through a winter and said ‘yeah let’s build a city here, lets live here’ I don’t get it,” Sinclair-Smith said laughing, looking forward to the hot Australian weather.

Sinclair-Smith said he grew up in the industry, having a father that was reptile curator and his mother who was a marine mammal trainer at Sea World in Australia.

His first job in the industry was as a crocodile handler, a career-choice his mother didn’t fully support.

“She went and watched one of my croc shows once, and she would never go again.”

After his time as a croc-curator Sinclair-Smith switched to the managerial side where he thought he would be able to enact more change, a decision he stands by to this day.

Over his time with the zoo he’s had a lot of exposure to the different animals, and they all left an impression on the animal lover.

“Of course I’ll miss all the animals. I remember every animal at every facility, no matter how big the facilities are, I remember them all. But there’s always the ones that are a little bit more closer to your heart.”

Sinclair-Smith said the changes aren’t going to stop once he leaves. His legacy won’t be his work with any specific animal but his master plan to completely overhaul the zoo, a plan he’s going to keep an eye on, he said.

“I’m excited that the city is going to have those things happen, I’m excited to watch that roll out over the years, but from my beach and sandy warm spot!”

A phrase Sinclair-Smith used a lot is “World Class,” trying to not only make the Forestry Farm Park and Zoo modern and functional, but to make it into a facility that can stand out internationally.

Sinclair-Smith’s master plan includes the largest urban-setting bear exhibit in the world at 17.6 acres, an open-roofed beehive building and a safari stall with cougars, bears, wolves, elk, bison and pronghorns.

Although leaving the zoo and all its inhabitants is hard on Sinclair-Smith, the prospect of warm weather and an ideal job was too good of an opportunity to pass up.

“It really feels like to us like winning the lotto,” he said. “Just a stunning location. I’m going to rub that in a lot to people, I told my staff there’s a lot of selfies coming.”

He will be the manager at the Ningaloo Centre, a research, education, tourism, and community hub.

“We sometimes spend so much money trying to build and recreate experiences when they naturally exist. I want to ultimately share my passion for the environment in a pure, immersive way, the real thing.”

Sinclair-Smith may come back to visit, but he said it definitely won’t be during the winter.