'I did what I had to do': Saskatoon men recount dramatic Waskesiu Lake rescue

"Right place, right time,” said Meyers, who is better known to many people in Saskatoon as DJ Anchor.

“I like to think that if something like that happened to me or my family, someone would be there and they would just do the right thing too.”

The two were enjoying the beach with their families when Tye, an experienced lifeguard, noticed a pair of men jump into the water from the breakwater.

“I’m a lifeguard, so I recognize to watch the water just in case of situations,” he said.

Anderson had just spent the better part of an hour in the water searching for fishhooks with his nephew Hunter, and knew the water was cold, which he believes led to the incident.

“I think they maybe kind of panicked a little bit,” Meyers said. “Maybe the muscles were starting to seize up a little bit, panic, shock, all those things came into play.”

“And then we saw his hat go up, and he said ‘help,’” Anderson said. “And my wife was the one who said, ‘Oh he just said help’ and then immediately my whole family broke out running.”

Meyers started swimming out to the men, while Anderson grabbed a paddleboard from a nearby family and started paddling.

“It was 50 metres away, but you know, every second counts,” he said.

In a video recorded by Anderson’s wife Makenna, five people are shown coming to help; Anderson and Meyers, a family friend, a woman with a paddleboard, and another man who was swimming in the area. 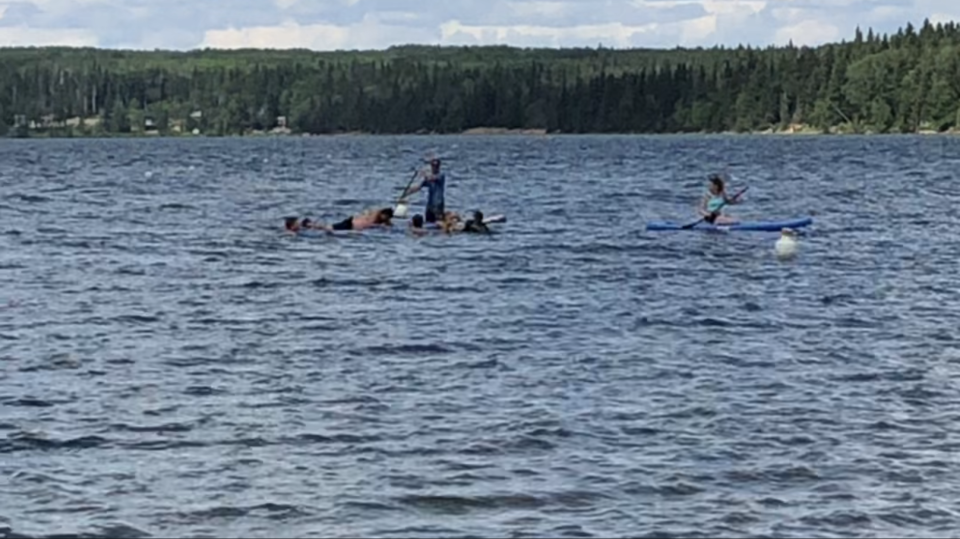 “We had three standup paddleboards coming in sequence,” Meyers said. “The cavalry was coming.”

One man was able to grab onto a nearby buoy, while the other struggled, his face and mouth just out of the water.

“I get into the water off my paddleboard, I grab the one guy’s hand and throw his hand onto the paddleboard.”

“I’ll always compare it to this,” said Meyers of the man trying to climb aboard.

“I don’t know if you grew up around lakes but it’s like a five, six, seven-year-old kid trying to get into the boat for the first time without a ladder. They kind of put their arms up on the side of the boat, but it’s that much higher than them, and they’re just kicking their legs wildly trying to get on.”

They were eventually able to pull the men from the water.

“He gets himself up onto the paddleboard and he’s struggling to breathe,” Anderson said. “He grabs onto the side and we get him up there and we start pulling him in.”

“I just started yelling to my wife and my nephew Hunter on the beach,” Meyers said.

“Get towels ready, get something warm to get them dried off, all that kind of stuff. My wife had called the national park people there to get vehicles up with the proper medical devices.”

“We left him with the authorities,” Anderson said. “The park rangers came and checked him out, made sure he was good.”

As his family was going to their car to leave, Anderson says he was able to talk with one of the men, who oddly enough, had his car parked in the next spot.

“He was sitting at the edge of my car, and I was like, ‘Oh hey, how’s it going?’ It was such a weird situation, and he was like, ‘Oh man I’m just so grateful for you being there for me.’”

It wasn’t the first water rescue experience Anderson has had.

In 2014, the quad that his great aunt was riding was swept away by strong currents in the South Saskatchewan River near MacDowall and he was one of several people that helped pull her out.

Anderson was given a medal of honour from the incident.

“I’ll remember that day forever because it was the most shocking day of my life,” he said.

Sunday was Meyer’s first foray into water rescue—he hopes it was also his last.

“I just feel like I did what I had to do,” he said. “If that ever happened to somebody I knew or someone else, I’m happy to do it again, but hopefully I don’t have to put myself in that situation.”