SASKATOON -- A woman in Saskatoon is helping provide comfort to children when they need it most with her sewing machine and quilting scraps.

Flo Wagner has been quilting for 10 years and noticed she had a lot of leftover materials. Wagner didn’t want to throw them away, so she got creative.

“I started making these little bears and I gave them to my children, grandchildren and family friends and then I just needed to find a home for more of them,” Wagner told CTV News.

Some of the bears feature Batman, Star Wars and Avengers material while others are made of colourful solid colours. She says it roughly takes her about one afternoon to create one bear.

What started as a hobby for Wagner has taken on added significance.

Wagner has a family friend who works with the Saskatoon Police Service (SPS) who suggested she contact Detective Sgt. Joanne Smallbones, who works in the child abuse and sex crimes unit, to donate her extra bears.

Smallbones took Wagner up on her offer. Now the bears are offered to kids who are coping with traumatic situations. 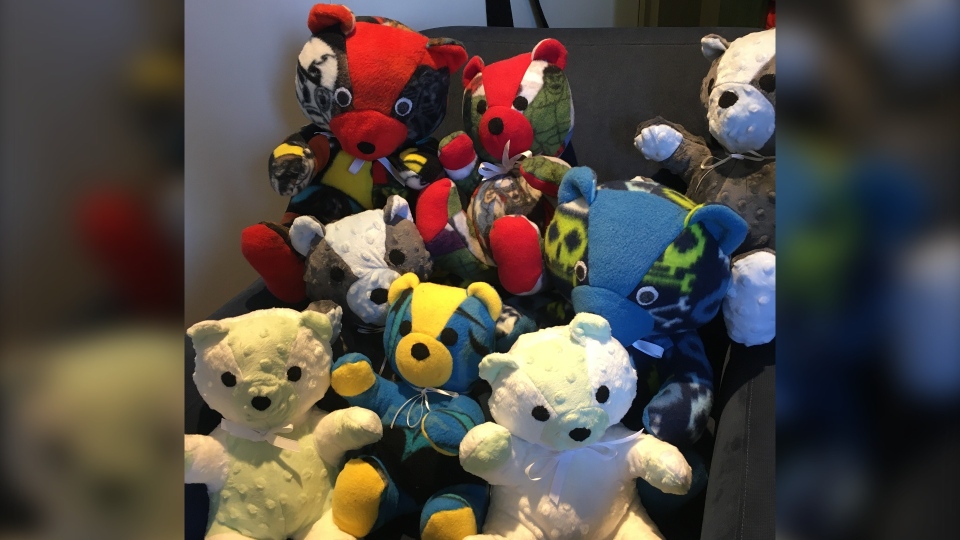 "It makes me happy that someone is using them and that they’re serving a purpose," Wagner said.

Smallbones says she was “really touched” when Flo reached out.

“We see a lot of negative things in our career and a lot of people that are really critical and it was really nice to see somebody reach out that wanted to do something for the kids that we see,” Smallbones said.

She says the unit investigates child abuse and often inerviews children who may witness a traumatic event.Smallbones says it’s nice to leave “something positive” for the children after they come through the station.

“The children are always overjoyed, it’s often difficult if we let them come in and choose because they want one of everything, most times we’ll pick one and give it out.”

Smallbones says it gives investigators a great feeling to give them out, as they can’t necessarily take away their trauma, but can give a small gift at the end.

While SPS can’t accept donations, the Saskatoon Police Service Foundation is a non-profit organization that can accept funds from the community.

Since funding is limited, according to Smallbones, the unit saves Wagner’s teddy bears for the “really traumatic cases” as they’re always worried about running out.

“Every kid deserves one clearly, but there’s only one Flo, she’s doing her best and we really do appreciate it.”

Wagner says she’s sent over 15 bears to the unit and says she’ll keep continuing to do so in the near future.