Drake Jordan is well on his way to becoming a big name in the world of technology, as the youngest winner of Apple’s worldwide Swift Student Challenge.

“At first I was really shocked,” the 13-year-old told CTV News.

The Swift Student Challenge sees students around the globe showcase their skills in coding to create an app on the topic of their choice.

Jordan created an app called Sway, which allows people to experience synesthesia, a phenomenon where two senses get combined in the brain and trigger each other.

“I experienced synesthesia myself, so I really wanted to make something that could help people like see what that like,” said Jordan. “I have a form of synesthesia where sound turns into feelings, like tactile feelings.”

Jordan describes it as feeling like a tickle, but without the tickle.

“What Sway does is it shows a moving gradient on the screen which is supposed to imitate what it feels like, and the gradient changes depending on how you move your device. Sway isn't the same kind of synesthesia that I have, I just wanted people to have a way to experience it,” he said.

“The more people can learn about synesthesia, the more widely known it is, the more they can understand how it affects people.”

For winning, Jordan received a prize package with Apple products as well as a surprise Zoom meeting with Apple CEO Tim Cook.

“They said they were holding a student challenge event for all the students. We went through the process of making a script and rehearsing it, and then on an actual day it was a complete surprise when Tim Cook showed up,” said Jordan. 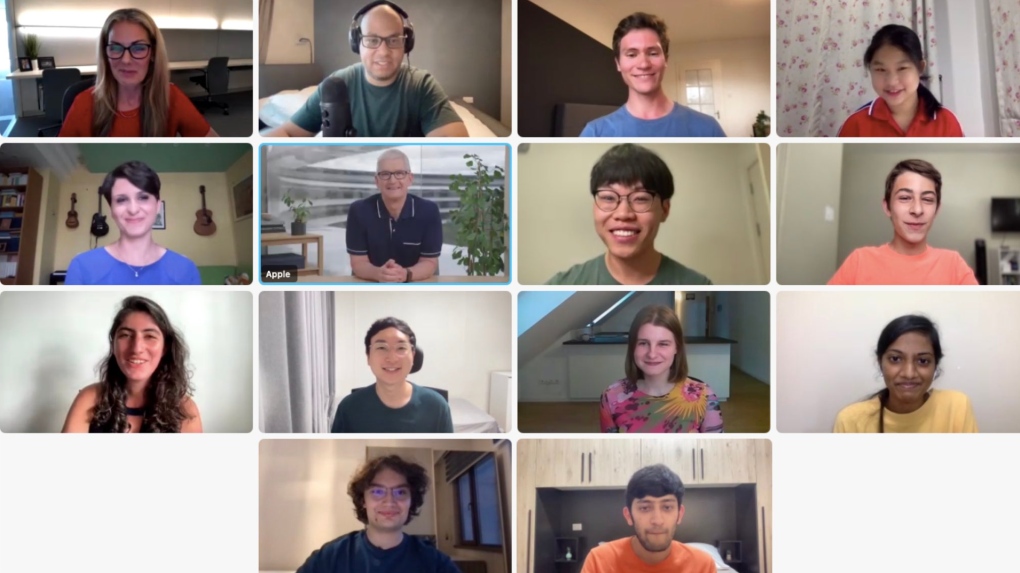 “Since I was the youngest person on that call, that's how the moderator introduced me to him, and he said it's amazing what I've been able to do at such a young age and he's excited to see where I go from here.”

Jordan’s mom Tanya says he’s always loved technology and this level of acknowledgement for her son’s passion has been extremely exciting.

“He explained (his app) and I thought 'That's kind of brilliant," she said.

“I loved the idea of what he chose to do, I thought it was original and different and something he knows personally about, so I was really proud of him for the concept and how he executed.”

Perhaps even more impressive than this level of success at a young age is that Jordan has only been writing code for the last two years.

“It's a huge learning curve, but once you get the basics down, it's pretty easy because it starts to seem like a second language almost the way you write it,” he said.

“Once you understand it, you're able to write it pretty easy.”

“He will sort of disappear into his room and come out with 'What's your line total of code?' and it'll be in the thousands, tens of thousands,” said his mom.

Jordan sees himself making a career out of creating apps here in Saskatchewan or wherever the tech industry takes him.

“Whatever app that could help people the most is what I want to work on,” he said.

Air Canada and Toronto's Pearson airport again claimed the top spots for flight delays on Tuesday, marking at least four days in a row where the country's biggest airline has placed No. 1 of any large carrier worldwide.

Canada's immigration department is restarting all Express Entry draws for immigration applications Wednesday, after pausing the program 18 months ago during the pandemic.

Emergency room delays to continue for 'quite some time,' doctor warns

An emergency room physician is urging governments to address the country’s shortfall of health-care workers in light of the recent temporary shutdowns of emergency departments and the staffing downsizing at others.

A high school friend of B.C. teen Amanda Todd has testified he took action when he saw what he described as a 'pornographic' picture of her on Facebook in November 2011.

Boy, 2, orphaned after both parents killed in Fourth of July parade shooting

Kevin McCarthy, 37, and Irina McCarthy, 35, the parents of a two-year-old boy, were among seven people killed in the Chicago-area mass shooting on July 4.

Australian authorities have charged 12 members of a religious group with the alleged murder of an 8-year-old girl, police said in a statement Tuesday.