PRINCE ALBERT -- A Grade 12 student at Prince Albert Collegiate Institute (PACI) is leading the class in a project to make sleeping mats out of plastic bags for people who are homeless.

Tekla Mattila found the idea of turning plastic bags into yarn, rather than rugs or baskets, on Pinterest and wanted to do something meaningful for the community.

"I'm super grateful for everyone who has been able to make it turn into something bigger because I didn't think it was going to end up like this,” Mattila said.

Mattila’s environmental science teacher, Kylie Emmerson, made a post on Facebook last week asking for plastic bag donations. Anyone in Prince Albert who has plastic bags to spare can drop them off outside of PACI’s northwest doors, but people are also collecting in Regina, Saskatoon, Warman and several other communities.

The project is for Nutrien’s Caring For Our Watersheds contest. Cash prizes are awarded to program finalists and their schools, with an additional $10,000 available in implementation funding to share between realistic entries from both finalists and non-finalists, according to Nutrien. 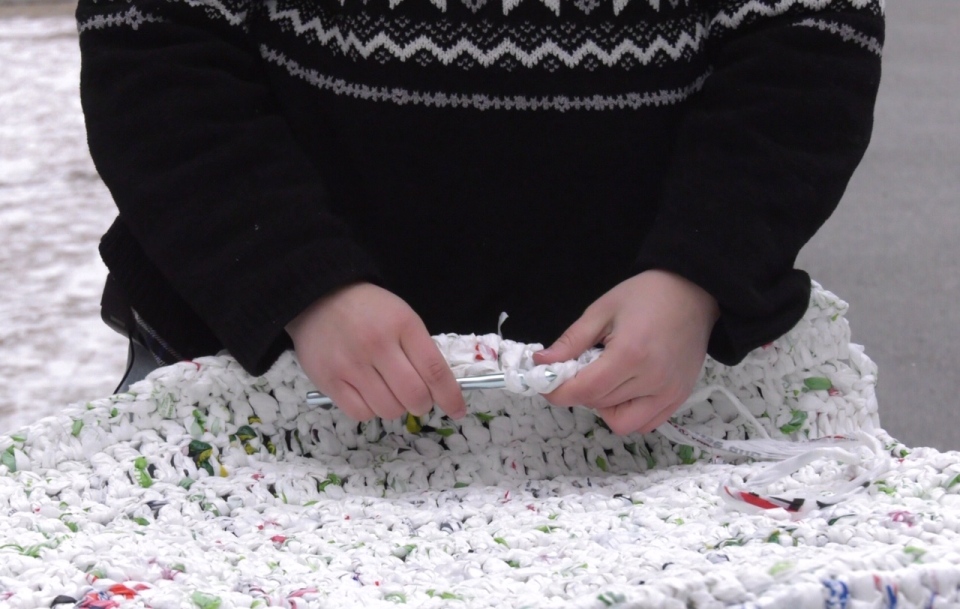 Each student came up with their own ideas on how to reduce pollution. However, Emmerson said it became a class project with an overwhelming amount of support for Mattila’s idea.

“It’s really great timing with having the positivity and the energy that’s behind it. (It’s) been a good pick-me-up and made something where there’s two benefits to it. You’re helping the environment, but you’re also helping people who are in need,” Emmerson said.

Matilla, who has been crocheting for about six years, makes the mats by first cutting the plastic bags into loops and then weaving the loops together to create a strand, followed by crocheting the strands to create a cushiony feeling surface.

Matilla will also be making shoulder straps so people can easily carry the mats around. The mats are waterproof, bug resistant, easy to clean and insulating.

Matilla plans to give the mats to an LGBTQ organization to distribute.

"That's a cause that's very close to my heart and I know that there's lots of issues with homelessness within the community, so if I can help with that, then that would be awesome."

Matilla is teaching classmates how to make the strands out of plastic bags and how to crochet.

Donated plastic bags are left outside for 72 hours before use to protect against COVID-19.

Thhis story has been updated with the correct details regarding the Caring for Our Watersheds project.