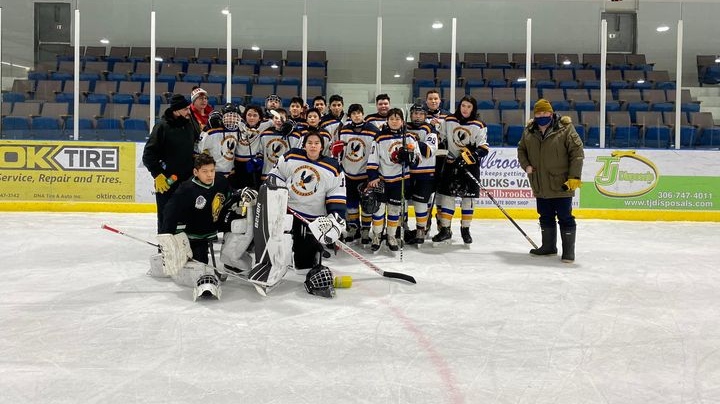 Hockey Saskatchewan is investigating an alleged incident involving two U15 teams that faced off in a tournament in Shellbrook over the weekend.

Racist slurs were directed at members of the Stanley Mission U15 Riverhawks by an opposing U15 team from Tisdale, according to Devin Bernatchez, a Lac La Ronge Indian Band councillor.

"It’s time (Hockey Saskatchewan) take a strong stand against racism in hockey and suspend players, coaches and officials who promote and allow hate and ignorance in the game," Bernatchez said in a message posted on social media earlier this week.

"I put up with this back when I played hockey, our kids don’t need to put up with it, they just want to have fun playing the game they love."

In an email to CTV News, Hockey Saskatchewan general manager Kelly McClintock said the organization has "received the allegations" and is conducting an investigation.

The Tisdale Minor Hockey Association also said it's aware of the allegations and is "cooperating fully with Hockey Saskatchewan's investigation into the matter."

In a follow-up post, Bernatchez said he has since received a phone call from a Hockey Saskatchewan board member which he described as "supportive."

"I hope those who experience racism in hockey speak out and don’t brush it under the rug," Bernatchez said.

Students trapped inside a classroom with a gunman repeatedly called 911 during this week's attack on a Texas elementary school, including one who pleaded, 'Please send the police now,' as nearly 20 officers waited in the hallway for more than 45 minutes, authorities said Friday.

'I don't deserve this': Amber Heard responds to online hate

As Johnny Depp's high-profile libel lawsuit against ex-wife Amber Heard wound down, Heard took her final opportunity on the stand to comment on the hate and backlash she’s endured online during the trial.

New federal firearms bill will be introduced on Monday: Lametti

Federal Public Safety Minister Marco Mendicino will table new firearms legislation on Monday, according to his colleague Justice Minister David Lametti. In an interview with CTV's Question Period that will air on Sunday, Lametti pointed to the advance notice given to the House of Commons, and confirmed the plan is to see the new bill unveiled shortly after MPs return to the Commons on May 30.

For 70 years, Andre Hissink has held a grudge against the Dutch government, but this week, the 102-year-old Second World War veteran’s persistence paid off – the Dutch king granted his wish for a rare dual citizenship.

'Died of a broken heart': Can it really happen?

Takotsubo cardiomyopathy, more commonly known as 'broken heart syndrome' or stress-induced cardiomyopathy, is an actual medical condition triggered by severe emotional or physical stress and is different from a heart attack.

After a six-week trial in which Johnny Depp and Amber Heard tore into each other over the nasty details of their short marriage, both sides told a jury the exact same thing Friday -- they want their lives back.