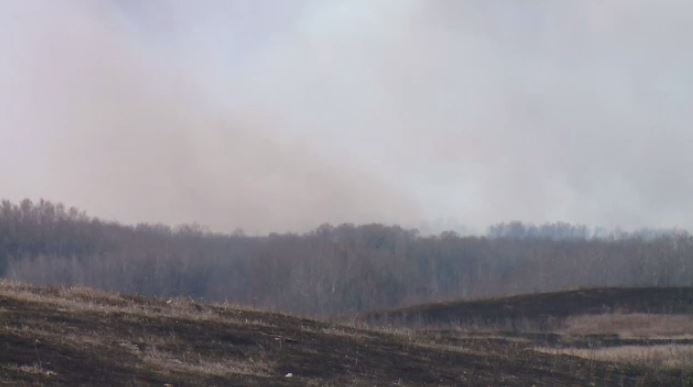 Scorched grass and smoke from the fire near Bigger.

Crews are battling high winds and high temperatures as they try to keep the grass fire near Biggar contained.

Around 4:30 p.m. Tuesday the fire jumped a trail but crews were able to bring it back under control overnight, Fire Commissioner Duane McKay told media Wednesday.

Mckay said the roughly 64-square kilometre fire is about 1 km from some rural homes and about 9 km from the town itself, but does not threaten it.

Temperatures aren’t dropping overnight and winds aren’t slowing down, with sustained speeds of 30 to 35 kilometres per hour and gusts up to 50 km/h, he said.

While crews hope to have success containing the fire it may burn in the area, a wildlife refuge with lots of underbrush, for some time, he said.

A plane will map the location of the fires and start the investigation into their cause.

McKay said it’s a volatile situation in much of southern Saskatchewan. He advises homeowners to mow down grass in yards, examine storage of combustibles and be aware that sparks and hot exhaust from ATVs and pickup trucks, as well as cigarette butts, can cause fires.