'Here to demand justice': Protest held in Saskatoon over RCMP’s handling of tensions in Nova Scotia 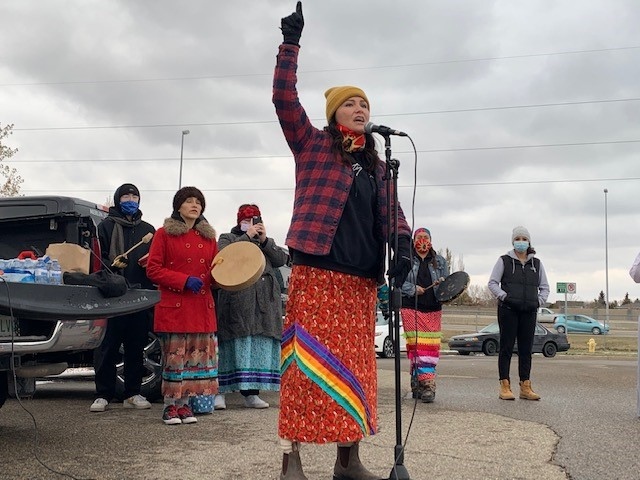 SASKATOON -- More than 150 people rallied in front of Saskatoon’s RCMP building at 400 Brand Place beside Circle Drive South in support of Mi’kmaq fishers as tensions continue to rise in Nova Scotia.

Lindsay Knight, one of the rally spokespersons called for the defunding of the RCMP after following stories in the ongoing dispute between the Indigenous people of N.S. and commercial lobster fishers. Many say the RCMP not doing enough in protecting Mi’kmaq people after a fire destroyed a Mi’kmaq lobster pound over the past weekend.

Robert Merasty, Chief of the Flying Dust Cree Nation talked about the historical relationship Indigenous people have with the land and how they only took what was needed to survive. He criticizes commercial lobster fishers talking about the importance of conservation when he says the Mi’kmaq are only fishing for less than one percent of the lobster population as a inherent and Treaty Right.

“History tells us that our people have always walked with this Earth. Our plants and animals, taking care of Mother Earth, we always walked in that way in harmony. We were not the ones who decimated our beaver population or bison population. We only took what we needed to survive for our livelihood and now the Mi’kmaq are being accused of that. (federal government) get your head out of the sand to adhere to the Supreme Court decision of moderate livelihood to honour our obligation, our Treaty Right to hunt and fish,” said Chief Merasty.

Sylvia McAdam, a lawyer, professor and one of the founders of Idle No More said she has been watching the developments in N.S. closely. She said Canada is only following the rule of law when it’s in favour for the country and not the Mi’kmaq people.

“Canada brings out the rule of law when they want to enforce it to their benefit. There is a rule of law happening here that Canada refuses to enforce. The RCMP are a part of the problem. We are here today calling for them to enforce the rule of law. A 1999 Marshall decision from the Supreme Court clearly states that the Mi’kmaq have a Treaty Right. It’s the rule of law. So for the RCMP to standby and watch the violence, they’re upholding, in my opinion and researchers will support this, white supremacy and racism,” said McAdam.

Monday night, an emergency debate took place in the House of Commons with opposition parties accusing the Liberal government for inaction.

Prime Minister Justin Trudeau defended his government by indicating that it approved additional resources to increase police presence in the region over the weekend. Trudeau also promised to work with both Indigenous and non-Indigenous communities to come up with a solution.

“We need to have an approach that doesn't just recognize inherent treaty rights, but implements their spirit and intent,” Trudeau said. “That's why we will work with commercial fishers and the Canadians to ensure that this is done fairly. I understand that this is challenging, but this isn't an inconvenience, but an obligation. If we are truly to be the country that we like to think of ourselves as, this is the road we must walk.”