Heat warning issued for much of Saskatchewan 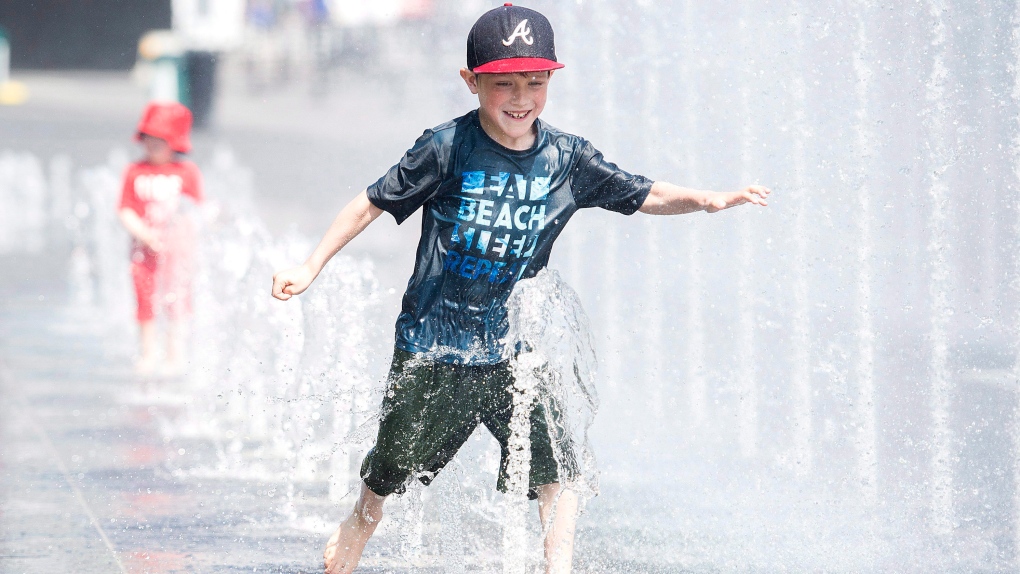 Seven-year-old Samuel Bedard from Quebec City runs through a water fountain as he beats the heat during a heatwave in Montreal, Monday, July 2, 2018. (THE CANADIAN PRESS/Graham Hughes)

SASKATOON -- Extreme heat continues to blanket a large portion of Saskatchewan through the long weekend.

On Sunday, Environment and Climate Change Canada (ECCC) issued a heat warning for much of the southwestern part of the province and the north.

Daytime highs are expected to creep into the low thirties with overnight lows staying in the teens, according to ECCC.

The national weather agency also issued a special air quality statement for southeast parts of the province as smoke moves south from wildfires continuing to burn in the north. Smoke and high temperatures may combine to bring further health stress on some individuals, ECCC said.

According to ECCC, temperatures in July were record-breaking, and it was predicted that August temperatures would also be above average.

“Preliminary July data has shown that most areas through southern and central areas of the province have been about two and a half to three degrees warmer than normal and a lot of that will break the top 10 all-time for July," Justin Shelley, meteorologist for ECCC, said.

“It does look like August is going to remain a bit above normal from what we’re seeing right now, so might be a little while longer before we get that cool fall weather,” Shelley said.

Shelley wants to remind residents to stay hydrated, use sunscreen and wear a hat during the extreme heat.

“If you do have to work outside or do anything outside during the peak heat in the afternoon you want to make sure you take breaks, hydrate, and get in some shade or air conditioning.”