'He would be alive today': Sask. pediatric ambulance team was available to help toddler but wasn't called, logs show

SASKATOON -- Sara Almightyvoice has been looking for answers since June, when her two-year-old son died in an ambulance on his way to the children's hospital in Saskatoon.

An ambulance from nearby Wakaw was called, but Almightyvoice questions why it wasn't the province's specialized pediatric transport team — the same team that in the past had been dispatched to help her son, who had specialized health needs.

“If he would’ve been with that pediatrics team he would be alive today I think. That’s what I feel,” Almightyvoice said.

Late in the evening on June 11, Almightyvoice, who is from One Arrow First Nation, took her youngest son to Rosthern Hospital for treatment after he began experiencing a high fever and started vomiting. Byron suffered from chronic lung disease, asthma and had Down syndrome.

Once at the hospital in Rosthern, Byron's condition didn't improve, so the attending physician ordered him to be transported to Jim Pattison Children’s Hospital (JPCH) in Saskatoon.

The Saskatchewan Pediatric Transport Team — which had cared for Byron before — wasn't dispatched.

“The pediatric team, when they come, they’re on it, focused on him. But this ambulance that came that night they weren’t really focusing on him. It wasn’t right,” Almightyvoice said in an interview in July.

The toddler died shorly after he left the hospital.

“All they said is his heart stopped, that’s all they said they didn't say anything else,” said Almightyvoice.

A coroner’s report on Byron's death said the toddler was reported to have a cough and was vomiting occasionally for about 24 hours. Due to his complicated history, his parents brought him to hospital for treatment.

The report indicates Byron’s cause of death was sudden cardiac arrest due to complications from Down syndrome. But the complications were never explained, Almightyvoice said. 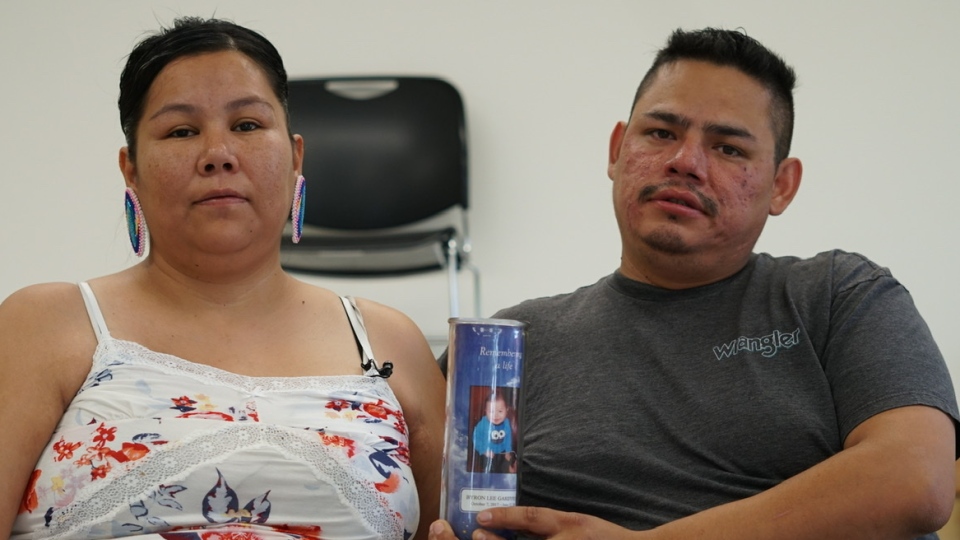 "I’m searching for answers like why did this happen, how did this happen and still nothing. They aren’t saying nothing,” she said from her home in One Arrow during a follow-up interview earlier this week.

In response to Almightyvoice's push for answers, she was invited by the Saskatchewan Health Authority (SHA) to a meeting in Wakaw on Nov. 13. During the meeting, Almightyvoice said she was provided a letter explaining what happened to her son.

The letter, shared with CTV News by Almightyvoice, says that while Byron was being assessed in Rosthern a referral was made to a specialist in Saskatoon and a safe transfer was organized.

The letter states the decision to transport Byron to JPCH was due to the temporary unavailability of laboratory equipment. In the letter, Dr. Olukayode Olutunfese wrote that Byron’s vitals were stable upon departure from Rosthern.

“During transportation, Byron’s oxygen levels became low and he went into cardiac arrest. All resuscitation measures were exhausted,” he writes.

During the meeting, Almightyvoice says she asked why doctors didn’t order the pediatric transport team to take her son from Rosthern to Saskatoon. She posed the question twice and says she received conflicting answers.

“I asked them why the pediatrics team was not called out, and from the doctor’s point of view, Byron was not sick enough at the time, so that’s why they didn’t come out, but he was really, really sick,” she said.

“He also said they were unavailable and they were on a call and I was like, 'How are you telling me this and that at the same time?’”

Documents obtained by CTV News reveal the pediatric transport team appears to have been available on the evening of June 11 when Byron needed to be moved.

Call logs show the team was called out on the morning of June 11 to transport a patient to Saskatoon International Airport. The transport team was not called upon again until after 8 p.m. on June 12.

Almightyvoice said she arrived at Rosthern Hospital with her son and her sister at around 10 p.m. on June 11. Byron was pronounced dead in the early hours of June 12 — a span of time where the team potentially was available to provide assistance.

It isn't just Almightyvoice who had previous positive outcomes with the pediatric team, which even made the trip to One Arrow to help Byron on one occasion.

According to SHA statistics, the team responded to 2,410 calls from April 2015 to April 2020 and since 1996, the team has had no deaths or "unplanned events" during transport.

“That’s crazy,” Almightyvoice said when she learned about the logs obtained by CTV News.

“It pisses me off, they were open they should have just came. How was he not sick enough?”

When asked why the specialized team was not dispatched to help Byron in the late hours of June 11 and early morning of June 12, the SHA said out of respect for privacy it cannot comment on the matter.

A spokesperson said the SHA is aware of and currently reviewing the situation.