'He really couldn’t even defend himself': Witness recounts Saskatoon dog attack that left man in hospital with critical injuries

SASKATOON -- A 40-year-old man remains in hospital with critical injuries after being attacked by two large dogs late Friday night.

Crews were on scene Monday cleaning blood off the front steps of a house in the 400 block of Avenue E South, where part of the attack took place.

Jason Evanochko, said he was at his friend’s house when that attack happened and witnessed it from the top floor of the house. He heard the man screaming and banging on the door for help. He said it was a traumatizing event to witness.

"He really couldn't even defend himself and the dogs were just terrorizing the poor guy. Like going for his arms, his legs, his face, like everything. They had ripped his clothes off and were pulling him away, and he couldn't do anything,” Evanochko told CTV News.

One of his friends called the police and was told not to go outside, according to Evanochko.

Police arrived on scene around 11:50 p.m. along with the Air Support Unit which spotted the attack.

Officers on the ground found the man injured and still being attacked by the dogs.

Evanochko said he then saw one of the dogs approach the officers.

"The cop kind of tried to kick (the dog) away to keep him away from the cop himself and then the dog went right back to the guy and we were all yelling at that point, 'just shoot the dog,' like no worries about protecting anything else, just stop the situation,” he said. 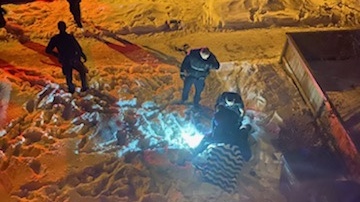 Police said they were forced to shoot and kill the dogs as they continued acting aggressively.

Evanochko said he thinks the man who was attacked lives next door and was the owner of the two dogs, which he said were pit bulls.

Police were unable to confirm whether the victim was the owner, but said it’s believed the dogs and the victim came from the same address.

Evanochko said the dogs were known to be aggressive.

Jasmine Hanson, communications coordinator for the Saskatoon Society for the Prevention of Cruelty to Animals (SPCA), said she cannot comment on the specific incident but said dog attacks do happen.

She said there are warning signs people should look out for.

“We always tell people, recognize the signs of fear in a dog, lowered tail, lowered ears, lowered head, they may be avoiding eye contact,” Hanson said.

She adds that if a dog is approaching you and it looks like it might attack – don’t run.

"Running away is going to excite them more and be even more threatening unfortunately. So, what we tell people is to freeze keep your arms by your side and don't move. If a dog begins to attack you, the best thing you can do is to try to put something between you and the dog,” she said.

Police said the investigation has been completed and that no charges have been laid.