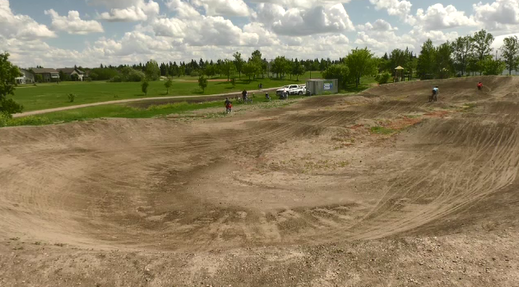 Globe BMX is working towards building a new track in Saskatoon, something they're hoping to accomplish in 2021 with a fundraiser. (CTV News/Ethan Butterfield)

SASKATOON -- Globe BMX is working towards building a new track in Saskatoon, something they're hoping to accomplish in 2021 with a fundraiser.

The current track, which is located behind the community centre, is not up to standard, said Jen Korney, a member of the Globe BMX team.

The campaign has been many years in the making.

There is a developed business plan, with the city and mayor becoming partners, said Korney.  A lease has been drafted and approved, she said.

“Building this track is so important to us,” said Korney. “Because we feel it's going to create this lasting effect in the community."

Globe BMX is hoping to raise $1 million during the course of its fundraiser.

"A lot of people have asked why we're trying to raise so much,” said Korney. “Really we could build the track for a lot cheaper, but our goal is to build it right and make sure it lasts a lifetime here."

The campaign went live on June 29. Donations will go to building a new metre of track.

People that donate will have their name placed on the track.