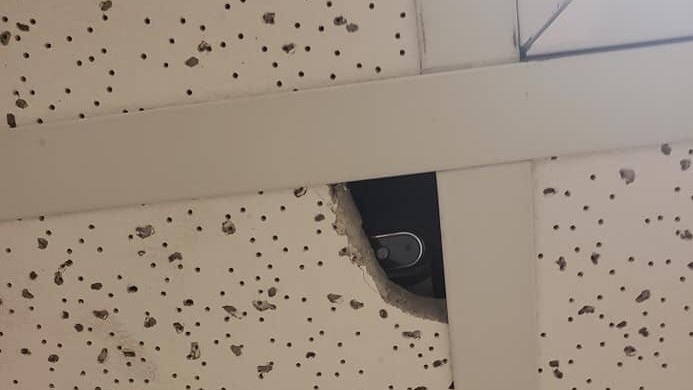 A woman shared an image on Facebook showing a camera phone in a broken ceiling tile. (Courtesy: Gabby Starr/Facebook)

SASKATOON -- A 25-year-old man arrested in September after a woman reported seeing a smartphone hidden in a bathroom ceiling has pleaded guilty to attempted voyeurism.

Adnan Iqbal was accused of trying to spy on customers at the Fas Gas Plus location on Circle Drive East, where he worked.

At Saskatoon Provincial Court on Tuesday, Iqbal was handed a 15-month suspended sentence with several conditions. He is not allowed contact with his victims and must serve 30 hours of community service.

Iqbal is also required to hand over any device capable of recording to a peace officer upon request.

Iqbal was arrested and charged in early September after a woman contacted police and said she believed she and four girls were recorded while using a gas station washroom.

At the time of the incident, a woman shared an image on Facebook showing a camera phone in a broken ceiling tile.

In the post, the woman said she and her daughters stopped at a Fas Gas location in Saskatoon and claimed a male employee rushed into the washroom before they entered.