The church was located near Redberry Lake, which is about 80 kilometres northwest of Saskatoon.

Lynn Swystun, who lives about a mile and a half west of the church, says she noticed smoke from her yard around 12:15 p.m. then drove to the area and discovered the church engulfed in flames.

“It was surreal, I was in shock,” she told CTV News.

“Flames were already coming out of the windows and stuff … It didn’t take long for it to completely crumble, maybe about half an hour.”

Swystun said some local farmers brought water tanks to help put out the fire, but it was too late.

“We weren’t going to save anything, the fire wasn’t going anywhere. So, we just watched it burn. Neighbours from all around came out, some were in tears of course.” 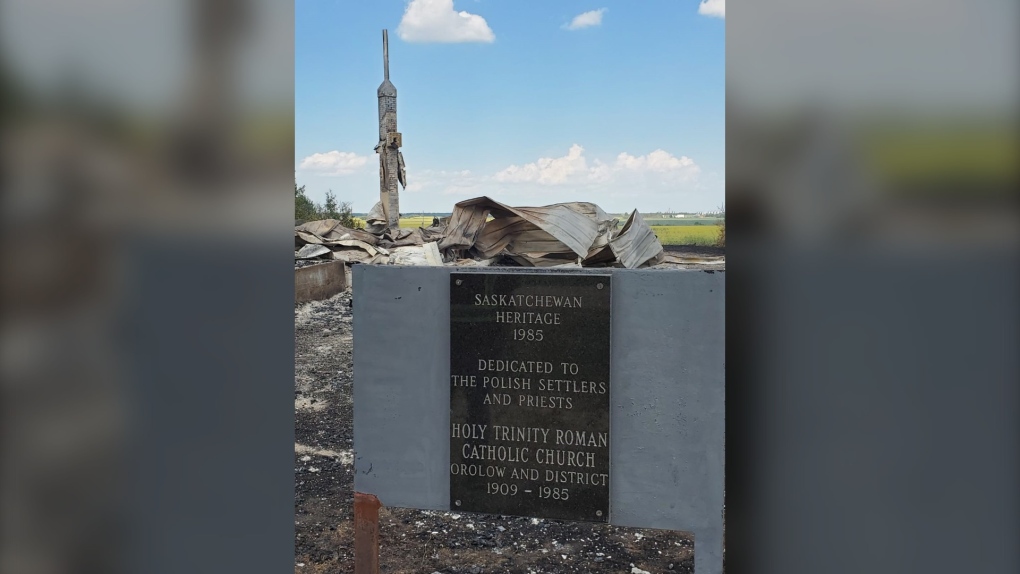 Swystun said the church was not being used but was a historic landmark where people could go inside – some even using it as a backdrop for photos.

According to a plaque in front of what is now a pile of rubble, the Holy Trinity Roman Catholic Church for Orolow and District was open from 1909 to 1985.

Swystun’s husband, Douglas, said this is a loss for the community.

“It’s very quiet, nothing happens. So, when a church like this is ripped away from us, it’s horrible,” he said.

Douglas said while no one runs the church, his brother spent time and money renovating it about 10 years ago to keep it part of the community.

“The church burning, this is burning a hole in our hearts.”

Both Swystun and Douglas say they believe the fire is suspicious as the church does not have any power or gas, and it didn’t look like the grass around the church was on fire.

In a statement, Premier Scott Moe said he was "saddened and deeply concerned" by the destruction of the church.

"While the cause of the fire remains under investigation, the burning of this church is suspicious without question in the midst of other arson attacks on churches across Canada," he said.

"In the last number of weeks, I have seen Saskatchewan people come together in the wake of tragic discoveries to build hope for the future while recognizing the harmful actions of the past. Acts of division do nothing to further this purpose, nor do they represent the collective heart of Saskatchewan people. The individuals responsible for such destructive and hate-driven acts must be held accountable."

Blaine Lake RCMP said in a news release that initial investigation has deemed the fire suspicious.

“It is believed the fire had been burning for some time before police were called. Upon arrival, the church had already been destroyed by fire. Officers confirmed the church was no longer in use prior to the fire and no one was injured by the fire.”

The cause has not yet been determined.

More than a dozen Christian places of worship have been set on fire and vandalized recently in Canada.

The fires are believed to be in reaction to the confirmation of more than a thousand unmarked graves so far at several former residential school sites.

As for what will happen to the area where the church used to stand, Douglas says he would like to create a miniature replica of the church and keep it there next to the old church bell and the plaque.