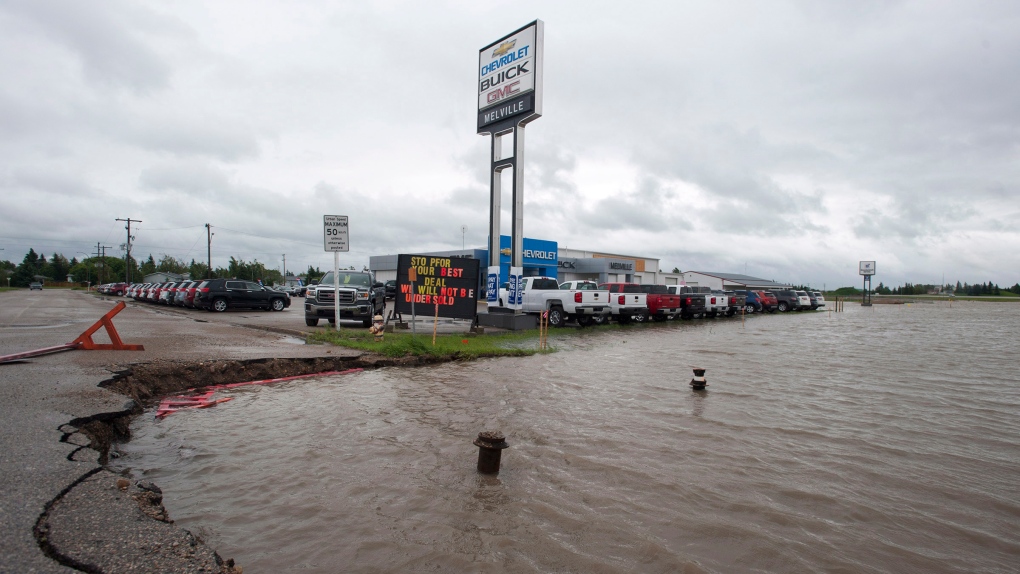 The ditches overflow with rain water near a car dealership in Melville, Saskatchewan on Sunday, June 29, 2014 . Highways are closing and communities are declaring states of emergency after a deluge of rain drenched southeast Saskatchewan and parts of Manitoba. THE CANADIAN PRESS/Liam Richards

Damage caused by flooding and torrential rain across Saskatchewan this week will cost more to repair than damage from the 2011 floods, Premier Brad Wall told reporters Tuesday.

“We think we’re looking at an event that’s larger in financial impact than the 2011 flood because it’s so widespread, the number of communities is so significant, and also because of the major infrastructure and highway damage,” Wall said.

Repairs from the 2011 flood cost $360 million, with the province committing nearly half the cost and the federal government covering the remainder.

Damage costs from this week’s rainfall will exceed that number, Wall said, unable to provide an exact estimate.

He stressed the province’s current estimates are in their very early stages and noted that engineers have yet to assess the damage on several highways.

“Our engineers are going to get out there and assess this thing as soon as they can. In some cases they cannot yet to begin the assessment because there’s still so much water in the way.”

Fifty-two communities in southern Saskatchewan have so far been placed under a state of emergency due to the flooding.

The premier hopes to travel to some of the most affected areas Wednesday.

“I’d like to get a firsthand view and offer whatever moral support we can from a provincial perspective,” Wall said.

He said the province will likely use its rainy day fund to cover the damage, but noted he expects the federal government will provide some support.