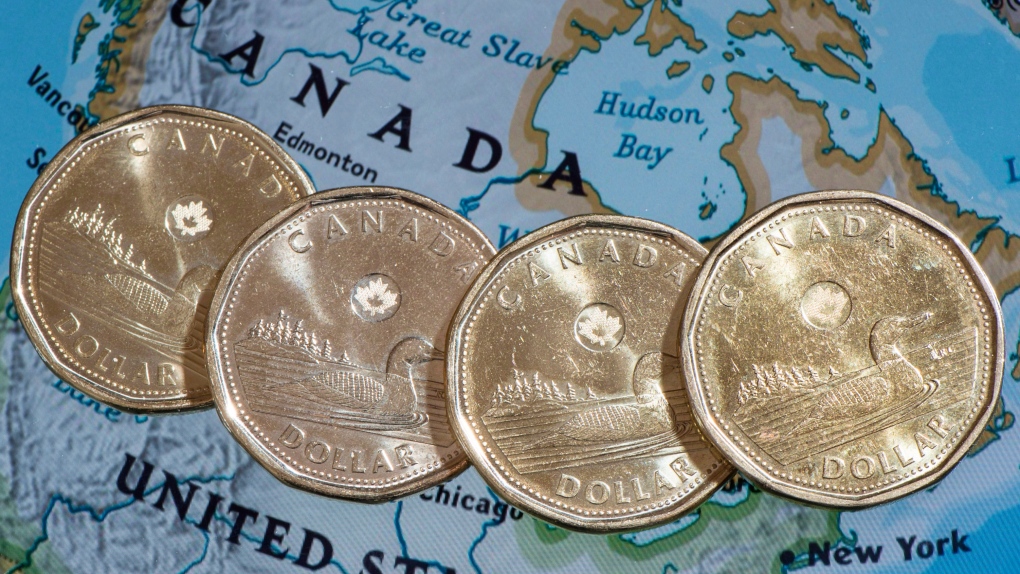 Loonies are displayed on a map of North America in this file photo from Thursday, Jan. 9, 2014. (Paul Chiasson / THE CANADIAN PRESS)

OTTAWA -- New figures from Statistics Canada show the economy contracted for two consecutive quarters in the first six months of 2015, which meets the technical definition of a recession.

Here are five things to know about the numbers. An economic rebound could be underway: Even though the economy declined at annual pace of 0.5 per cent over the second quarter as a whole, it grew 0.5 per cent in June, the final month of the quarter. The June increase was the first one-month spurt in real gross domestic product to hit 0.5 per cent since it rose 0.63 per cent in July 2013.

A large chunk of second-quarter gains came on the backs of households: The data shows that household consumption climbed 0.6 per cent at a time when interest rates remained low. As a result, household savings dipped to 4.0 per cent from 5.2 per cent in the first quarter. Transport purchases -- with help from 2.9 per cent growth in vehicle purchases -- were the biggest component with a 1.5 per cent increase.

The oil-price collapse delivered a big blow to economic growth: Natural resources, including mining, quarrying oil and gas extraction, contracted by 4.5 per cent in the second quarter -- for the second straight quarter. The decline was mostly tied to a 5.7 per cent drop in the non-conventional oil extraction sector.

Exports creep up: The numbers reveal that exports edged upwards in the second quarter by 0.1 per cent following two quarters of contraction. Goods exports gained by 0.2 per cent, reversing a 0.5 per cent decline in the first quarter. The export of motor vehicles and parts rose by 4.7 per cent, while crude oil and crude bitumen climbed by 3.3 per cent.