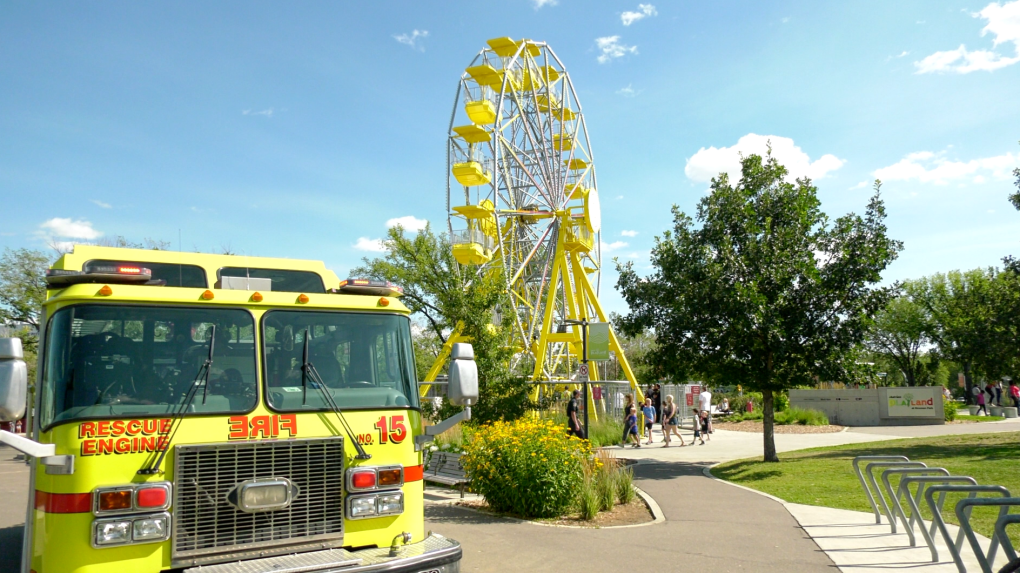 Parkgoers at Nutrien Playland got an extremely long ride and an unforgettable story to tell Saturday after the famed Ferris wheel at Kinsmen Park broke down.

At roughly 2:30 p.m. with the sun shining over top of clear skies, 16 people riding the Ferris wheel were stranded for roughly an hour after a mechanical issue brought the usually busy ride to a standstill, according to the Saskatoon Fire Department.

Chris Kosty was fourth back in line with his two boys when he heard a loud hissing noise coming from the centre of the wheel. Previously spending time working on amusement rides, he had a good idea what was happening.

“Turns out the top tire of the two tires that control the speed of Ferris wheel ended up blowing out. So now they can’t control it from stopping or going right now,” Kosty said.

It didn’t take long for Kosty to get to the bottom of the mystery after park employees began inspecting where the noise was coming from.

They pointed out that they just finished replacing the top tire and they were concerned that's the issue, plus you can actually see the tire looks visibly flat,” he said, pointing to the deflated tire that was no longer able to make contact with the ride it was trying to spin.

“They thought it was a normal noise coming from the Ferris Wheel. And then it pretty much stopped right from there. They were having issues getting to go back and forth a little bit and the tire just kept on spinning,” he said.

Within a few minutes, dozens of people began crowding around the Ferris wheel as it slowly became apparent the ride wasn’t going to get moving anytime soon.

Once the fire department showed up, a technician was called in to see how best to retrieve the stranded riders.

“I was actually just telling the wife I wish I had my drone here. I’d fly some water up to them,” Kosty said.

Ann-Marie Chokani was walking up to the park to meet some friends when she heard an announcement about the Ferris wheel breaking down. While she was upset her children weren’t able to go for a ride, she was thankful she was on the ground staring up at the stranded riders and not the other way around.

“Some disappointment, but some relief that we hadn't been here 20 minutes earlier and were actually on it,” she said.

Chokani said watching the experience added a little excitement to her day, while her son instantly provided some perspective.

“Well imagine how the people are feeling up there. It's probably not that exciting for them,” she said, quoting her son. “So he put it into perspective that it's probably not a really exciting time for them.”

Around a little after 3:30 p.m., workers were able to use chains and wrap them around the Ferris wheel to slowly return the 16 people back to the ground safely without any injury. After an hour-long ride, each person was handed a bottle of water for their troubles.