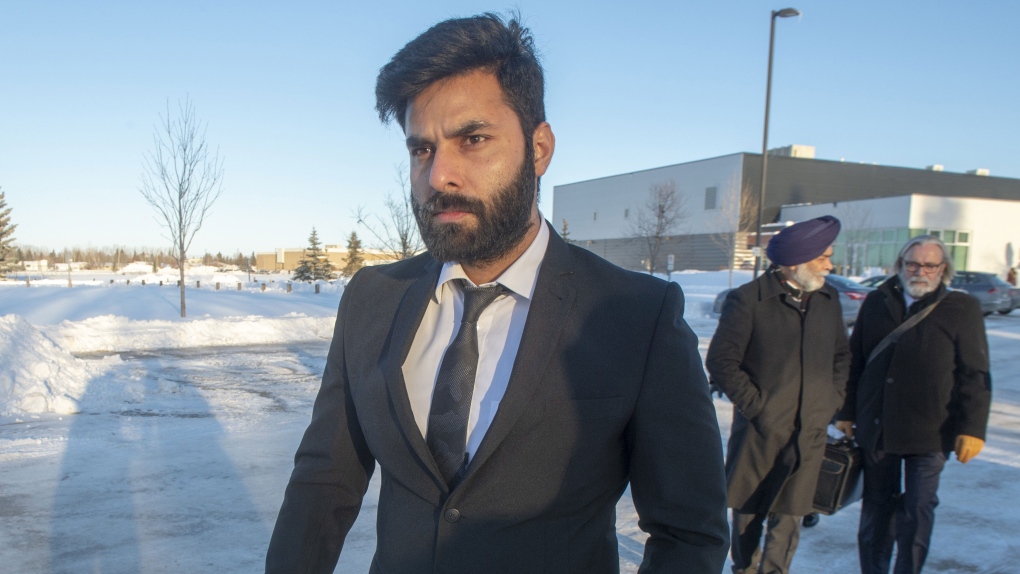 REGINA -- A former truck driver who caused the deadly Humboldt Broncos bus crash has submitted paperwork with reasons why he should not be sent back to India when he gets out of prison.

Jaskirat Singh Sidhu is now waiting for the Canada Border Services Agency to write a report that will recommend whether he be allowed to stay in his adopted country or be deported.

A grieving father of one of the hockey players killed will be waiting, too. Scott Thomas said he aches everyday for his 18-year-old son, Evan, but submitted a letter in support of Sidhu.

Sidhu was sentenced almost two years ago to eight years after pleading guilty to dangerous driving causing death and bodily harm in the April 2018 collision that killed 16 people and injured 13.

Court was told that Sidhu, a newly married permanent resident, had missed a stop sign at a rural Saskatchewan intersection and driven into the path of the Broncos bus carrying players and staff to a junior hockey league playoff game.

The lawyer for the then-30-year-old Sidhu noted during sentencing arguments that jail time would mean the commerce graduate wouldn't be allowed to stay in Canada, where he has lived since following his partner who had come over in 2013.

A criminal conviction that carries a sentence of more than six months makes a permanent resident ineligible to remain in the country.

An immigration lawyer says Sidhu's bid has the makings of other cases where deportation was avoided.

"It's very difficult to say how it's going to go, but I do think this is one of those types of cases where (border services) could choose to exercise their discretion given the exceptional circumstances," said Erica Olmstead, a Vancouver-based immigration lawyer, who's not representing Sidhu.

Lawyer Michael Greene, who is working with Sidhu, said last year his client has no prior criminal history, is well-educated, fluent in English and extremely remorseful.

He acknowledged Sidhu's crime had catastrophic consequences, but added his actions were not malicious.

Thomas said he's more concerned about regulations that allowed the inexperienced truck driver, three weeks on the job, to get behind the wheel.

"We just always felt that the deportation part of it shouldn't necessarily apply. He's a broken man. He's broken psychologically and spiritually, and to deport him now would just add to the suffering to him and his family."

Thomas forgave Sidhu in court and has since kept in touch with his wife, who has shared their emails with her husband.

Thomas said he knows Sidhu's desire to remain in Canada is divisive.

"There'll be a lot of families that would never support this and there are going to be some that do, too."

Olmstead said the deportation policy is there to protect Canada's security, but she has seen orders avoided when someone is guilty of a single offence as in Sidhu's case.

"But on the other hand, you've got this terrible tragedy where there were so many victims."

She explained that a border officer considers community connections and someone's chance of reoffending when writing a report, which could take months, and decides whether there are "exceptional circumstances" that would allow a person to remain in Canada.

"It's quite rare for people to not then still get referred for a removal order."

The Immigration and Refugee Board then holds a hearing to consider the report and is responsible for issuing any deportation order.

A permanent resident can appeal the board's decision on humanitarian and compassionate grounds, but not if a sentence, like Sidhu's, is longer than six months.

"This is the end of the road for him," Olmstead said.

Sidhu could seek a review before a Federal Court, but would first need to be granted leave to do so, she said.

This report by The Canadian Press was first published Jan. 20, 2021