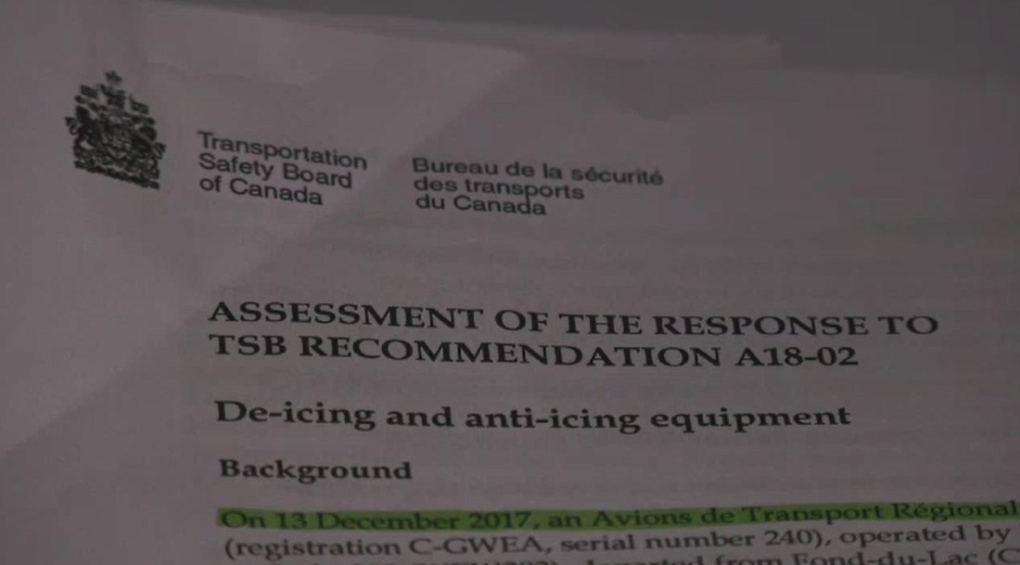 More than a year after an airplane crashed in northern Saskatchewan and months after the Transportation Safety Board (TSB) announced recommendations related to the crash, it appears concerns remained about planes taking off from northern airports without following rules for de-icing aircraft.

The crash happened in December of 2017 when a West Wind Aviation plane taking off for Stoney Rapids crashed less than a kilometre from the Fond-du-Lac runway. One person died while several others suffered serious injuries.

In December of 2018, the Transportation Safety Board investigation issued two recommendations: ensure adequate de-icing and anti-icing equipment is available and ensure compliance with regulations.

Email correspondence obtained from the province's justice ministry through a freedom of information request by CTV News reveal that in April 2019, concerns still lingered about the de-icing of aircraft, four months after the TSB had issued its recommendations.

The provincial government uses air service to transport staff and personnel to northern locations for court hearings and other matters.

An email from April 2019, outlines concerns raised about a flight departing out of Meadow Lake a month or two earlier in snowing conditions, alleging no efforts were made to de-ice the plane.

“This is not only dangerous, but illegal in terms of violating the Transport Canada Air Regulations regarding the ‘clean aircraft concept,'" reads a portion of the e-mail. Another email was sent by someone identified as an airline transport pilot license holder detailing a specific concern about de-icing on the morning of February 20th, 2019 but indicated the issue had been a problem for a while.

“However, as I indicated, I have yet to see an aircraft being de-iced in accordance with the procedures I outlined in my email," the email's author said in response to questions about how often a lack of de-icing was noted.

A source with experience in the air travel industry in Saskatchewan, who spoke to CTV News on the condition of anonymity, says concerns have come up in the past about de-icing on northern flights and suspects there may have been a range of issues at play including pressure on pilots to get planes in the air.

"If you work for a company that maybe doesn’t have a lot of cash to burn, there may be pressures on pilots to not de-ice because it’s expensive and it increases your turnaround times.”

According to the source, there can be a delicate balancing act between business and safety.

“I believe there are operators who have purchased lots of equipment, but it’s very clear to the pilots that they should use as little de-icing fluid as possible. And I suspect that whether the pilots infer pressure or whether it’s more overt than that, I think there is still pressure on pilots out there.”

Meeting with Transwest Air in 2019

The emails show the issue was raised with Transwest Air, an airline which is owned by West Wind Group of Companies.

In April of 2019, the Director of Flight Operations of Transwest Air wanted to set-up a conference call involving the airlines Flight operations team and any justice ministry employees or others who might have had concerns about de-icing.

Emails show the conference call took place on April 29th, 2019, and the concerns were addressed.

“Although the meeting started off a bit heated, I think the issues of de-icing was satisfied.” reads an email from a justice ministry employee the day after the meeting

Stephen Smith joined the board of West Wind last year and is now President and CEO of West Wind Group of Companies.

"I've been at, at least five different carriers, and of the carriers I've been at, West Wind, Transwest Air are in the upper echelon in terms of safety focus."

In an interview with CTV, Smith says West Wind has undertaken several steps to ensure de-icing equipment is available and used whenever needed, and even sent CTV photos of the equipment.

He adds the airline will not even fly into airports unless they know there is adequate de-icing equipment working and available.

Smith says other work has been done since the TSB issued their recommendations. He says the company and Transport Canada both did audits last year to ensure employees were trained and had equipment and that regulations were being adhered too.

And Smith says pilots are encouraged to report concerns whenever they arise.

"That plane does not move one inch until the pilot says ‘I'm satisfied that I have a clean wing. Or the clean surfaces that I need in order to take off.”

Smith says safety is number one and always comes first.

The TSB says it's satisfied with Transport Canada’s plan to implement their recommendations, though the deficiency file remains active.

The investigation into the crash in 2017 is still ongoing with a final report still to come.