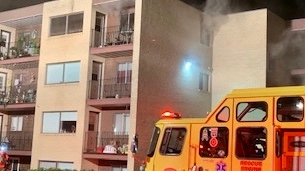 It was an unexpected early-morning wake-up call for residents of an apartment on Avenue V north due to a fire in a suite.

Crews were called to the building around 3 a.m. They arrived to find smoke coming from the third floor.

A woman living in the suite where the fire started says she woke up to the sound of alarms, and went to wake her son when she realized the apartment was filled with black smoke. Everyone from the suite made it outside safely.

Crews were able to quickly locate the fire and extinguish it. There were no injuries.

The fire was started by unattended cooking in the kitchen of the third floor suite, the fire department says.