If you're concerned you might be infected with COVID-19, the Saskatchewan COVID-19 self assessment tool  is a helpful resource.

The province says two people have died a result of complications related to COVID-19. This marks the first time anyone has died in the province from the virus.

“Our deepest condolences to the family and friends of two Saskatchewan residents that have now lost their lives to COVID-19,” Premier Scott Moe said on Monday. “I am so sorry for your loss. The thoughts of all Saskatchewan people are with you at this time.”

According to the provincial government, two people, both 70 years old, died in hospital on Sunday in two separate parts of Saskatchewan.

Health officials say at least eight cases are the result of community transmission. The rest are related to travel or large gatherings.

Six more people have recovered from the virus, bringing the recovered total to 14 in Saskatchewan.

Sask. NDP leader Ryan Meili said the deaths are a reminder for people to maintain physical distancing measures, stay home as much as possible and avoid gatherings.

Concerns over physical distancing along trails

With warmer spring temperatures on the weekend many in Saskatoon were out enjoying the outdoors, but for some it’s not a breath of fresh air.

One woman who lives along the river in the downtown put a post out on social media which got a lot of response.

Azna Groenewald posted that she’s “concerned that we may need to close the Meewasin trail due to the hustle and bustle in spite of our province being in a state of emergency during a pandemic and trying to contain the spread of COVID-19.”

From as far North as Stony Rapids, under 100 kilometres from the border to Nunavut Territories, all the way down to Carnduff, less than 50 km to the US border, people in Saskatchewan seem to be handling the COVID-19 pandemic the same way.

“We’re no different than anyone else,” said Lillian Laprise, town administrator in Stony Rapids, population 262.

According to Laprise, people there are self-isolating, and measures to limit the number of people in stores are being taken.

People in town are used to being inside at this time of year.

Two more people who work at Saskatoon Provincial Correctional Centre (SPCC) have tested positive for COVID-19, bringing the total number of infected staff members at the facility to four.

The two staff members were tested over the weekend according to the provincial government. They have both been instructed by health officials to self-isolate at home.

The province has identified seven more flights that have touched down in Saskatoon carrying a confirmed case of COVID-19.

Travelers in certain seats or arriving on international flights are asked to self-isolate and self-monitor for 14 days from the flight date.

Call for release of 'low-risk' inmates

A mother whose son is behind bars at Saskatchewan Penitentiary wants the federal government to release low-risk inmates to avoid transmission of COVID-19.

"It’s so congested in the prisons, so if anything breaks out, that virus would literally crash health care. It would go through there like a wildfire."

She said her son is a low-risk inmate and is serving time for his first offence.

The union representing Legal Aid lawyers and workers in Saskatchewan has previously called on both levels of government to release low-risk, non-violent inmates.

National Chief Robert Bertrand of the Congress of Aboriginal Peoples, which represents off-reserve status and non-status Indigenous Peoples, has also expressed concern about the potential for the rapid spread of COVID-19 behind bars.

What happens when physical distancing is ignored?

A trove of smartphone location data analysis is painting a dramatic picture of the potential impact ignoring physical distancing measures can have on the spread of the coronavirus pandemic.

Researchers from Tectonix and X-Mode Social, two U.S. data analytics firms, partnered up to gather and study the mobile phone location data from a few thousand active devices in one area to help visualize what can happen if proper physical distancing isn’t being done. 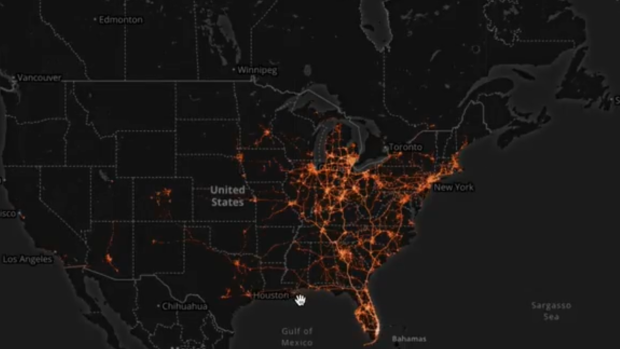 With professional and junior sports cancelling games and seasons because of the the global spread of COVID-19, other sports leagues in Western Canada are following suit.

The Western Women’s Canadian Football League  is cancelling its upcoming 2020 WWCFL season. The league, home to the Saskatoon Valkyries and the Regina Riot, announced the move on Monday.

“It’s very upsetting, it’s not just a football team, or a football league, it’s a sisterhood, a family and for a lot of people this is their stress relief and it’s devastating,” said Saskatoon Valkyries team president Janna Horn.

Also the CFL announced all training camps will be postponed.

"The ongoing global pandemic and the resulting directives issued by various governments make it unsafe to proceed with plans to gather our athletes," the league said in a statement.

The #CFL has decided to postpone the start of 2020 Training Camps.

Rules for truckers adjusted in response to pandemic

The province has introduced a temporary modification of hours of service regulations for truck drivers delivering essential items.

Military to assist in COVID-19 fight

Prime Minister Justin Trudeau says that the military iis preparing join the federal approach to combating the COVID-19 pandemic, and the federal government is expanding the wage subsidy for Canadian businesses, no matter their size.

"Over the past few weeks the Canadian Armed Forces have been gearing up to support our efforts and our communities, as we fight COVID-19,” Trudeau said Monday.

The CAF are actively planning for possible requests from the Government of Canada to fight #COVID19. We're working hard and will be ready to help Canadians when called upon by civil authorities.

COVID-19 over the weekend

On Sunday, the province announced 22 new cases of COVID-19, bringing the provincial number to 156.

A total of 20 those cases have now been linked to a snowmobile rally supper in Christopher Lake.

Ten adults and one youth are facing a series of charges, including failing to comply with a public health order for COVID-19, following an incident in Loon Lake.

A Saskatoon woman says she’s worried residents at a private seniors home in the city are not being protected from the virus. That includes her 86-year-old father with dementia who lives at Trinity Manor in Stonebridge.