COVID-19 updates for Saskatoon and area for Tuesday, April 7

As of Apri 7, the province says there are seven new confirmed cases of COVID-19 in Saskatchewan.

The total number of confirmed cases in the province now sits at 260, 169 are considered active.

Seven people are in-hospital in the province because of the virus, four in Saskatoon and one in Regina. Two other people in each respective city are in intensive care units.

Seven more people have recovered from the virus, which brings the total number of known recoveries to 88. 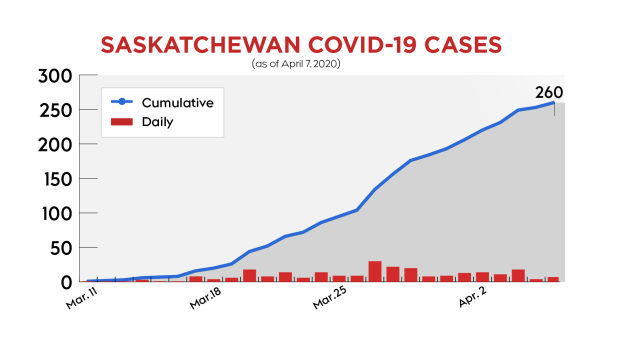 Saskatoon continues to be home to the largest concentration of confirmed cases in the province, with 131 of the cases from the Saskatoon area.

The future of physical distancing

With much of the world struggling financially and mentally in self-isolation and lockdowns, people around the world are undoubtedly looking forward to the end of such unprecedented measures.

But according to analysis by Harvard researchers, the best strategy for beating COVID-19 probably isn’t one extended period of physical distancing, but several staggered periods, with time in between to allow immunity to take hold in the population.

The research, described in the Harvard Gazette ahead of being peer reviewed, posits that this strategy could “avoid overwhelming hospitals while allowing immunity to build in the population.”

A photo captured by the Saskatoon Police Service Aerial Support Unit and shared on social media sums up how probably most people are feeling in the city these days.

On Tuesday the provincial government offered some suggestions for celebrating Easter safely during the COVID-19 pandemic.

To include friends and family from outside the household, the province suggests hosting a "virtual dinner" using digital technology.

While it's unlikely that existing COVID-19-related public health orders in Saskatchewan would prevent the Easter Bunny from delivering treats, it is worth noting the bunny's work  was deemed "essential" in Ontario on Tuesday.

Sharing the good news - the Easter Bunny is officially an essential service! pic.twitter.com/WO902xQOyD

How to keep your pet safe

People shouldn’t let their pets sleep in their beds and lick their faces during the COVID-19 pandemic, according to a Saskatoon animal health expert.

“We might actually be able to pass the virus from ourselves onto a pet, so it’s recommended that owners practice social distancing from their pets,” said Dr. Douglas Freeman, professor and dean of the Western College of Veterinary Medicine.

This advice comes as a tiger at the Bronx Zoo in New York  tested positive for COVID-19 , raising questions about human-to-animal transmission of the virus.

The phone calls and emails are pouring in according to Saskatoon mortgage broker Chris Kolinski, who runs an independent brokerage.

"Some of the questions that I'm asking have you lost your job because of COVID-19? Or did your child care close and now you have to be at home with your kids," Kolinski said.

Physcial distancing (in case you measure in 'big cats')

Perhaps hoping to ride on the cat-tails of a certain widly popular Netflix program, the City of Sasaktoon is offering an alternative system of measurment for physcial distancing.

During the pandemic, it's recommended when going out for necessities or a bit of fresh air that you keep a two-metre distance from others you encounter along the way.

According to a tweet from the city, that translates to one small tiger.

The COVID-19 pandemic has triggered a lot of questions and even more answers. The problem? Not all of them are true. CTV Morning Live’s Mike Ciona was joined by Gordon Pennycook, an associate professor of behavioural science at the University of Regina, to explain.

"A lot of the time the way we interact with social media is, we see something that seems true to us, we don't think about it and we share it," Pennycook says.

It's official: The CFL is postponing the start of its season because of COVID-19.

The Riders were scheduled to host the Montreal Alouettes in their home opener on June 19.

Commissioner @RandyAmbrosie issues statement on behalf of the #CFL

The Delisle Volunteer Fire Department is getting set for its second parade through the town Tuesday night to try and lift the spirits of residents in isolation because of COVID-19.

Last Tuesday the crew of about 10 volunteers in their five trucks made a trip through the town of about 1,000.

The fire department plans to continue the weekly parades until the end of April at least. 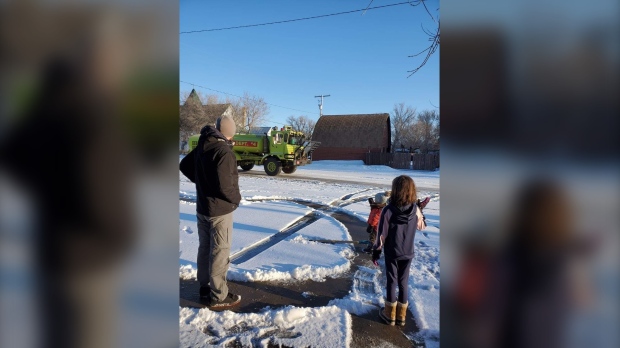 It was also one of the lowest daily increases in new confirmed cases in weeks but Premier Scott Moe said it’s too soon to tell whether this will be a trend.

“It shows what we’re doing is working,” Moe said. "You are making a difference, you are saving lives."

It’s too early to say whether this is part of a trend. But by staying apart, we are making a difference. #COVID19SK pic.twitter.com/sXjCY7UaEA

The NDP pressed the province to enlist the help os Saskatchewan Crown corporations and businesses to help manufacture non-medical masks.

On Sunday, Meili called for the general use of non-medical masks when going out following a similar recommendation by the U.S. Center for Disease Control.

The Saskatchewan Union of Nurses (SUN) said its members  have reported limits on PPE.

Also, while people in Saskatchewan continue to face challenges accessing services amid the COVID-19 pandemic, addictions and counselling treatments moving online has made  access to these programs more convenient for some.

“I’ve actually attended way more meetings than I did in-person meetings,” said a woman CTV has agreed to not name.

The province offered some advice for grocery shopping during the pandemic to help make trips safer for yourself and staff. Sending only one person to the store  was among the recommendations.

"While many grocery stores and retailers have taken steps to reduce crowding, you also need to do your part," the province said in a news release on Monday.