COVID-19 updates for Saskatoon and area for Thursday, May 28 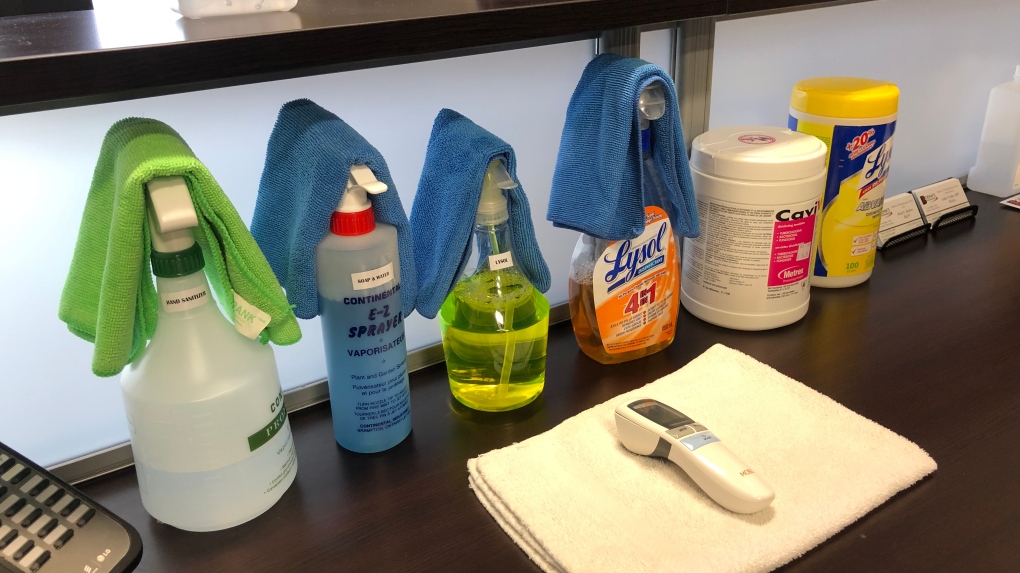 Bottles of disinfectant line a desk at a Saskatoon area physiotherapy clinic.

There are two new confirmed COVID-19 cases in Saskatchewan, bringing the provincial total to 639. Of those cases, 61 are considered active.

One of the new cases was found in Saskatoon, the other in the province's "north" COVID-19 tracking region, an area that includes the former Prairie North, Prince Albert Parkland and Kelsey Trail health regions.

Of the 61 active cases, 46 were concentrated in the far north.

As of Thursday, there have been 568 recoveries and 10 deaths related to the virus.

The province reported  three of those deaths this week.

No fines for gathering

Premier Scott Moe says there are no plans to fine those who organized or took part in two large family gatherings in Saskatoon that led to a COVID-19 outbreak declaration.

The opposition NDP is calling on the provincial government to release the Saskatchewan Health Authority’s 2019 CEO Tour Report on long-term care.

The report is intended to outline what’s working well and where improvements are necessary.

“They are, at this moment and time, the best tool we have for accountability,” said NDP MLA Danielle Chartier.

Justin Trudeau is being pressured by some of his own Liberal backbenchers to implement enforceable national standards for the operation of long-term care homes in Canada.

The pressure came Thursday from five Toronto-area Liberal MPs, whose ridings are home to some of the elder-care facilities that have been devastated by COVID-19.

And it came just as the prime minister was preparing for his 11th conference call with premiers since the COVID-19 pandemic hit Canada in mid-March.

Pharmaceutical company executives said Thursday that one or several COVID-19 vaccines could begin rolling out before 2021, but warned the challenges would be "daunting" as it was estimated that 15 billion doses would be needed to halt the pandemic.

Well over 100 labs around the world are scrambling to come up with a vaccine against the novel coronavirus, including 10 that have made it to the clinical trial stage.

"The hope of many people is that we will have a vaccine, hopefully several, by the end of this year," Pascal Soriot, head of AstraZeneca, told a virtual briefing.

Tourism Saskatoon is working on helping the local food industry come back strong from COVID-19.

The main course could be serving up culinary experiences.

“I think the bigger question will be how we manage those bookings for July and August given that we haven’t made any final decisions on how camping will you look in terms of capacity.”

The Saskatchewan government is pledging $1.125 million to help those caring for people with intellectual disabilities during the pandemic.

The money will provide a $100 monthly respite payment to caregivers from June to September.

The benefit is meant to help fill gaps created by the closure of day programs, limited part-time work and volunteer opportunities, the province said in a news release.

On Wednesday, the province said  two more people have died  from COVID-19 complications.

The two people, one in their 80s and the other in their 60s, are both from the far north region.

As has been the provincial government's practice during the pandemic, no other identifying information was provided.

The deaths bring the number of COVID-19-related deaths in Saskatchewan to 10.

There are were three new COVID-19 cases, bringing the provincial total to 637. Of the 637 cases, 68 are considered active.

The family of another COVID-19 victim, 64-year-old Nelda Maurice, who died on Monday told CTV news her condition kept deteriorating in the weeks after testing positive for the virus.

“We held out hope she would get better, but she didn’t,” her daughter Lana said.

Fares were suspended in March to limit contact between drivers and passengers.

"This year, due to COVID, families are in their backyards, kids can't go next door to play with their friends. So, trampoline sales have been great so far,” he told CTV News.

He usually displays a few in his showroom but said he’s all sold out.