COVID-19 updates for Saskatoon and area for Thursday, May 21

SSASKATOON -- Check back throughout the day for the latest on COVID-19 in Saskatoon and area.

The provincial government says it has set a target date of June 8 for phase three of the Re-Open Saskatchewan plan.

While many restaurants have offered takeout an delivery options during the pandemic, they have been closed for in-person dining.

“June 8 is a target date,” Premier Scott Moe said at the province’s daily update on Thursday. “That date can change in all or in part, in other areas of the province.”

As of Thursday, Saskatchewan had two new confirmed cases of COVID-19, bringing the provincial total to 622, the province said in its daily update.

The two new cases were found in the far north.

Of the 622 known cases, 106 are considered active, with 93 of the cases concentrated in the far north.

Fifteen more people have recovered from the illness, bringing the provincial total to 509.

Five people are in hospital. Two are receiving inpatient care (one in Saskatoon and one in Regina) and three are in intensive care (all in Saskatoon).

'Our clients are even more excited than we are'

After months of providing digital workout plans and tips, Crew Rowhouse is preparing to reopen its fitness facility.

The studio is one of several businesses planning to reopen on June 8 as part of phase three of the Re-Open Saskatchewan Plan.

“I think our clients are even more excited than we are,” Lorne Prefontaine, owner of Crew Rowhouse, told CTV News.

While national exports have declined by one per cent, Saskatchewan’s exports were up 4.2 per cent in the first quarter of 2020, the fourth highest among Canadian provinces.

“These positive export numbers from the first three months of the year show that Saskatchewan has what the world needs, and our province is well positioned for a strong economic recovery from the impacts of COVID-19,” Trade and Export Development Minister Jeremy Harrison said.

The legislative assembly was suspended on March 18, the same day Premier Scott Moe declared a state of emergency in Saskatchewan.

Last week Moe said house leaders had begun meeting to discuss the possibility of returning to the legislature.

Unknown to the NDP, the province had sent its terms shortly before the start of the conference.It led to an accusation from the opposition leader the province is playing games

“That’s the kind of stunt that you’d expect from Jeremy Harrison, he’s had plenty of opportunity, he knows we’re out here,” Meili said. “If he fires a letter just before I stand on the podium you can see the kind of games that are being played.” 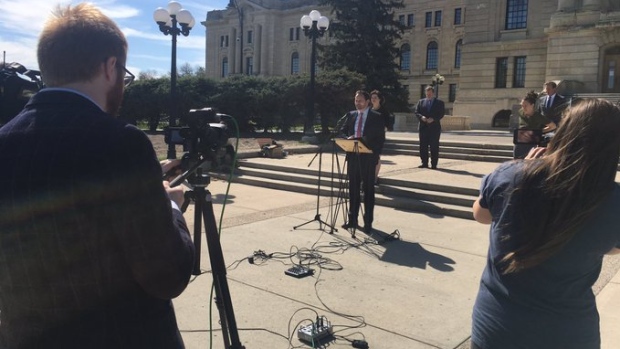 On the federal level, Prime Minister Justin Trudeau suggested on Wednesday that the House of Commons could resume business during the COVID-19 pandemic using a "hybrid" model, in which some elected representatives are physically in the chamber while others participate virtually.

After graduation ceremonies were cancelled for the class of 2020 due to the COVID-19 pandemic, Saskatoon Public Schools is offering every graduate a lawn sign to help celebrate their achievement.

"Families will be able to display the signs proudly, allowing neighbours and the community to share in the celebration of each graduate's achievement," the school division said on its website.

@cityparkschool Vice Principal and FLEX teacher is proudly standing (2 meters away) with one of his graduating grade 12 Eagles. #spslearn #grad2020 pic.twitter.com/6zXzBlHG4f

In its daily update on Wednesday, the province said a person in their 60s who had tested positive for COVID-19 has died. That brings the total number of deaths connected to the virus to seven.

There were 21 new confirmed cases of COVID-19 as of Wednesday according to the province. Sixteen of the cases were found in the far north, including nine in La Loche and six in Beauval the province said.

One of the new cases was found in Saskatoon. Of the 120 active cases in the province, 102 were in the far north on as of Wednesday.

The Saskatchewan Health Authority said it will expand COVID-19 testing criteria to include anyone who works outside of their home and expectant mothers.

The new testing guidelines will come into effect on May 25.

The CFL announced Grey Cup week in Regina won’t go ahead in 2020.

If the season goes ahead, the team with the better record heading into the championship game will host the Grey Cup final in 2020.

With more businesses reopening following the pandemic closures, the Saskatoon Farmers' Market will be opening a modified market starting Saturday.

There will be 25 to 30 vendors inside which is about half of the normal number. That drop is due to increased spacing between booths.