COVID-19 updates for Saskatoon and area for Thursday June, 4 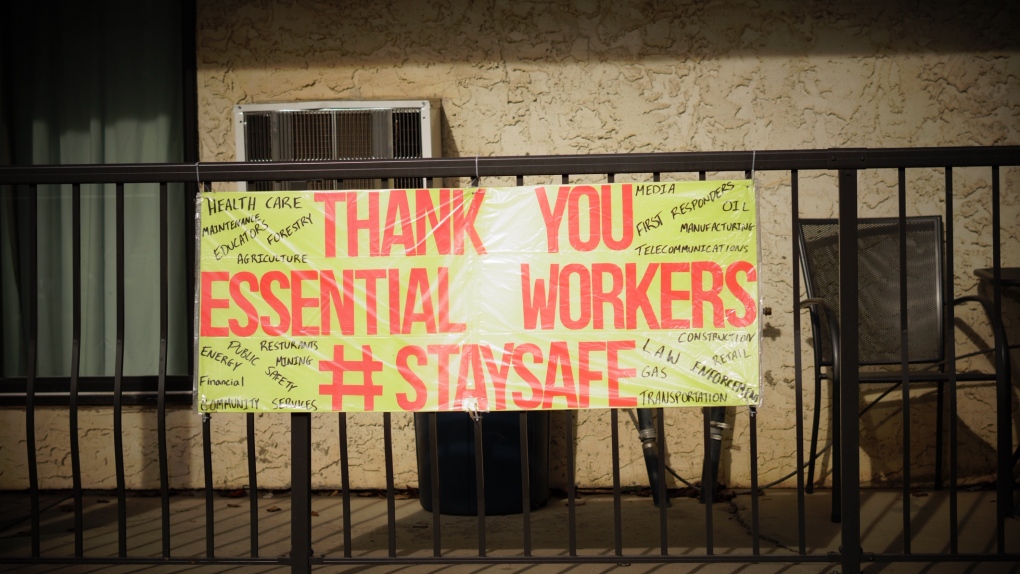 A message of support for frontline workers hangs on a Saskatoon patio during the COVID-19 crisis.

The province said there is was one new case of COVID-19 to report on Thursday. The new case was found in Saskatoon.

As of Thursday, Saskatchewan had 648 cases of the virus with 29 of the cases considered active.

Of the 29 active cases, 18 are concentrated in the far north.

The province said six more people had recovered as of Thursday for a total of 608 recoveries.

Two people are still in hospital due to COVID-19. Both patients currently require intensive care are located in Saskatoon, the province said in its daily update.

The provincial government says it has been consulting with education sector partners, including the Saskatchewan Teachers Federation, about what the 2020-21 school year will look like.

"Other jurisdictions have cautiously started to resume in-class learning and the Province has been monitoring closely to understand the experience," Minister of Education Gordon Wyant said in a statement to CTV Regina.

The Opposition wants to see concrete guidelines set out by the provincial government about if students will be returning to school and how that will happen.

As Saskatchewan’s economy continues to reopen, the province’s chief medical health officer says people should continue to work from home if possible.

“Where you can work from home, that is a better option,” Dr. Saqib Shahab said at the province’s daily update on Thursday.

Phase four will be split

The Government of Saskatchewan says the fourth phase of the Re-open Saskatchewan plan will now take place in two parts.

The dates for the two parts of phase four are yet to be announced.

Re-open Sask. plan's fourth phase to be rolled out in two parts

The province is expanding its COVID-19 wage supplement to include workers in long-term care and assisting living facilities.

Anyone working at a licensed public or private long-term care facility where a public health order is in place restricting visitors will be eligible, regardless of income level, the provincial government said in a news release on Thursday.

Also, staff at assisted-living facilities under a public health order who earn under $24.00 an hour will be eligible for the program. The worker's total earnings must be under $2,500 over the four-week period for which the worker has applied for the supplement, the province said.

On Wednesday, the province  said there was just one new confirmed case of COVID-19  in Saskatchewan, found in the far north.

The new case brings the provincial total to 647 cases, with 34 of those cases considered active.

Of those 34 active cases, 24 are concentrated in the far north.

As of Wednesday, there were two people hospitalized due to COVID-19, both requiring intensive care.

The patients are located in Saskatoon, according to the province.

The warning comes after a Black Lives Matter rally at the Legislature in Regina and with others planned for other Saskatchewan communities.

Organizers are encouraged to have gatherings done in vehicles and people marching on foot should keep at least two metres between people at all times, the release said.

In March the Saskatchewan Health Authority (SHA) strictly limited the number of visitors to hospitals, long-term care homes and other health facilities, allowing only those who met certain "compassionate" criteria.

On Wednesday, the SHA said based on the advice of a panel made up of patient and family advisors and infection control experts, it is expanding its criteria for what is considered a compassionate reason to visit a health facility during the pandemic.

Starting on Friday, SaskTel Centre will supply a three-day run of drive-in movies in its parking lot.

The screenings will include comedy hits like Dumb & Dumber and Masterminds and family favourites like The Lion King and Frozen 2. UFC 250 will be streamed live Saturday night.