COVID-19 updates for Saskatoon and area for Thursday, April 23

Here's advice on how to practice physical/social distancing and how to properly self-isolate at home.  Struggling financially because of COVID-19?  Support may be available from the federal government and the province.

On Thursday, the province reported five new known cases of COVID-19 bringing the provincial total to 331, with 57 cases considered active.

Saskatoon is home to 20 of the active cases and150 of the province's confirmed cases have been concentrated in the city.

The city divided by the Alberta-Saskatchewan border could end up being half-open for business within the next month.

Lloydminster will be in a unique situation given its position right on the border after Saskatchewan Premier Scott Moe announced a plan to reopen his province's economy.

"There are businesses on both sides, from salons to massage to chiropractic to doctors, the whole nine yards," said Lloydminster Mayor Gerald Aalbers. "That's why we need to take a look at this and make sure we've got it right when we move forward with it."

An epidemiologist at Ryerson University says testing needs to be a top priority as the province of Saskatchewan re-opens its economy next month.

Tim Sly calls COVID-19 a “stealth virus,” since as many as half of the people infected by the virus may never show any symptoms.

Hand washing has been one of the top tips from health officials, but it's leading to some other problems. Luckily, Jess Tetu from Just For You Day Spa shared some advice with anchor Stephanie Massicotte on CTV Saskatoon's Morning Live.

Restrictions around COVID-19 have created hurdles for a Saskatoon organization trying to find a safe home for its clients.

“The challenge today is because we’re not allowed in the correctional system, we’re trying to provide those services over the phone,” said Stan Tuinukuafe, an outreach worker with STR8UP, a group focused on helping newly-released inmates reintegrate into the community.

“Instead of me driving up to a housing unit to see if they have available space, everything is done by phone and so it makes finding resources a lot more challenging because it’s happening at a slower pace,” he said.

It's been just over a month since the COVID-19 pandemic prompted the provincial government to declare a state of emergency. On Thursday morning the province offered a first detailed look a plan to "reopen" the province in five phases with many public health restrictions and recommendations remaining in place throughout the entire process.

The first phase will begin on May 4, when previously restricted, non-emergency medical services can resume such as dentistry, optometry and chiropractic treatments. On May 15, golf courses will be permitted to open and on June 1 parks and campgrounds closed due to COVID-19-related restrictions can begin operating.

The second phase, which will begin on May 19 will see retail businesses such as clothing stores and sporting good stores reopening, with strict physical distancing in place. For example, customers would not be permitted to try on garments.

Also on May 19, barbers, hairdressers, massage therapists and other personal care professionals can begin offering services again, also with a rigorous set of safety measures in place such as asking clients screening questions and wearing "droplet PPE" like surgical masks and eye protection.

Phases three, four and five do not have specific dates set.

Phase three would see restrictions being eased further, with restaurants, child care facilities, tattoo artists and manicurists opening, once again with safety measures in place. The limit on gatherings would increase to 15 people.

Lindsay Macgregor, a mother of two who is immune compromised, said if school re-opens in June, she will not be bringing her kids back.

“I do not want to put my kids in that situation where they could possibly contract something and put my health at risk, it’s very much that extra step to keep our family safe and healthy.”

However, Malvina Rapko said that if the appropriate measures are taken by the schools to ensure students are kept healthy, then she will bring her four kids back when required.

“Basically if they restarted school within May or June I would absolutely bring my kids back to school and I would do whatever I can to help them keep up with whatever recommendations are in place during COVID-19.”

On Thursday Moe said discussions around schools could take place next month but by the time that happens the end of the school year may only be weeks away.

Meanwhile, recreational and entertainment facilities such as swimming pools, casinos, bingo halls and curling rinks would reopen with the maximum size of gatherings increased to 30 people.

Phase five would see the potential lifting of long-term restrictions such as limits on gatherings.

The leader of the Opposition says the plan's announcement is a positive sign, but that it's not without risk.

"It is good news that we can even be having this conversation in Saskatchewan. It's good news that the COVID-19 numbers have stayed flat," NDP Leader Ryan Meili said during a Zoom news conference Thursday morning.

"But it is also a plan that's not without risks and is not without some lingering questions about the details."

“It’s slow and staged and methodical,” said Clark, who added that success of the plan will depend on the cooperation and participation of the people of Saskatchewan.

Glen Smith has been teaching for more than 30 years, but in all that time he’s never had to teach from his own basement through YouTube.

“I really did get kind of upset and almost very down,” the Lucky Lake school teacher said about the news that school was cancelled in mid-March.

“I’m used to making YouTube movies, I’ve done it for 10 years. For me, I wanted the experience of actually teaching, because that what I miss.” 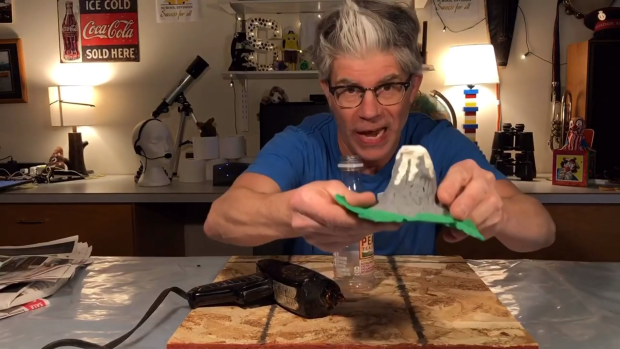 A normal part of being a teenager — simply spending time with friends — has been upended during like so much else during the pandemic.

One U of S researcher who studies adolescent relationships says the challenges facing teens right now are quite different than those of adults or small children and they should be recognized as such.

“Peer relationships, particularly those friendships, they're so developmentally important and that's really important to keep in mind, but it’s not that we have a lot of pandemics to compare," Carie Buchanan, Assistant Professor, St. Thomas More College said.

During his  address to Saskatchewan,  Premier Scott Moe said the first "couple" phases of a five-stage plan to reopen the province could begin in May, with dates expected to be announced Thursday when the full plan is revealed.

"Again, the only reason we can begin to have this conversation tonight is because together, we have reduced the spread and flattened the curve," Moe said in his address.

In an  interview with CTV News  shortly after the address, NDP leader Ryan Meili pointed to neighbouring Alberta, which after talk of reopening was hit with 300 new cases Wednesday.

"How are we going to make sure that we're doing contact tracing and testing, that we're making sure that people are protected so we don't see a resurgence," Meili said.

On Wednesday the province said there were  six new confirmed COVID-19  cases in Saskatchewan, which brings the total number of reported cases to 326.

More than 30 teachers and staff of Holy Family School  took to the streets  of Willowgrove on Wednesday morning. 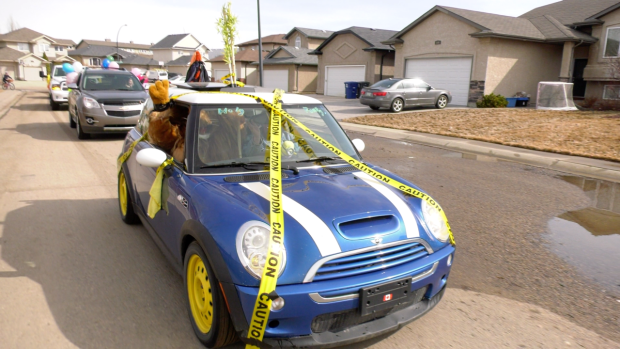 A nearly block-long motorcade was a way for teachers and staff to connect with students after schools were closed last month due to the COVID-19 pandemic.