COVID-19 updates for Saskatoon and area for Thursday, April 2

On March 14, days before the province would ban gatherings of its size, Marg Clair was pitching in at the Lakeland Snowmobile Club Wilderness Rally Supper in Christopher Lake

The 70-year-old, who later tested positive for COVID-19, says she felt healthy at the time.

"Everybody thinks that you have to have a high temperature or breathing problems or something like that but you really don't," Clair said in an interview.

The Saskatchewan Health Authority has put together a triage committee that would help doctors decide which COVID-19 patients would get a ventilator if hospitals become flooded with severely ill patients.

“Considering where we are, it is appropriate and responsible to have a set of guidelines on how a health organization and how health care teams can make a good decision at all times and in particular when teams may have a scarcity of resources,” said Dr. Susan Shaw, the SHA's Chief Medical Health Officer.

The John Howard Society of Saskatchewan is urging the province to quickly implement measures to reduce the further spread of COVID-19 in prisons.

Following news about a fifth positive test for COVID-19 among staff at the Saskatoon Correctional Centre, the John Howard Society said it has sent a letter alongside the Elizabeth Fry Society, CLASSIC and Pro Bono Law Saskatchewan to the Ministry of Corrections and Policing, requesting it take drastic action to protect the vulnerable inmates and those who work alongside them.

Saskatchewan has 13 new COVID-19 cases bringing the total above 200, according to the province.

As of April 2, Saskatchewan has 206 confirmed cases and four people in hospital.

Saskatoon currently has the most cases in the province with 103, followed by 44 in the Regina area.

Most calls were resolved by educating members of the public of the potential health and enforcement consequences that can result from non-compliance with the Public Health Order, RCMP said in a news release.

"Police officers are responsible for ensuring their actions do not put others at risk while doing our part to slow the spread of the virus. We need the public to do the same and that begins with the simple act of staying home and avoiding situations where there is the potential to spread the virus."

Isolating in stressful situations can lead to people losing a sense of belonging and can increase their sense of being a burden on others, says James Brayshaw with Saskatchewan Mental Health Training and Support Teams.

Brayshaw believes that can lead people to consider harming themselves.

“Once hope is lost, many people think, ‘I no longer want to continue going on in this journey which is painful,’” he said.

Mental health advocates recommend maintaining social interaction over the phone, or via Skype or FaceTime, sticking to the facts when it comes to consuming information or online content, and trying to stay grounded.

Physical distancing recommendations and strict orders around how many people can gather at one time were not being followed at a Saskatoon prison, according to union members at the Regional Psychiatric Centre (RPC).

Correctional Service Canada (CSC) says it is doing its part to protect staff and inmates at RPC. In a statement to CTV News, CSC said it has modified routines across its institutions to limit “comings and goings,” suspending all visits to inmates, work release orders for offenders and all prison transfers.

But an anonymous letter, dated March 30, written by ‘a concerned member of the public’ details a different account, describing an evolving and unsafe situation at the prison.

Debra Ross is the program coordinator for intimate family violence at Family Service Saskatoon, As public health officials and government leaders started encouraging people to stay at home, she knew it would be devastating for many.

"We know that isolation tends to be a huge barrier for many women experiencing intimate partner violence and trying to access support,” Ross said.

A place to isolate

The Park Town Hotel is one of many Saskatoon hotels offering discounted rooms for healthcare workers and travellers looking to self-isolate during the COVID-19 pandemic.

“Somebody had to step up and get going with this. We’re a local hotel, we’ve been here for the last 60 years, and it was important for us to support the local community,” general manager Salil Kulkarni said.

The hotel industry has taken a huge hit as a result of more and more people staying home and travel restrictions to limit the spread of COVID-19.

“We have no guests coming into the hotel, people are scared of walking in,” Kulkarni said. 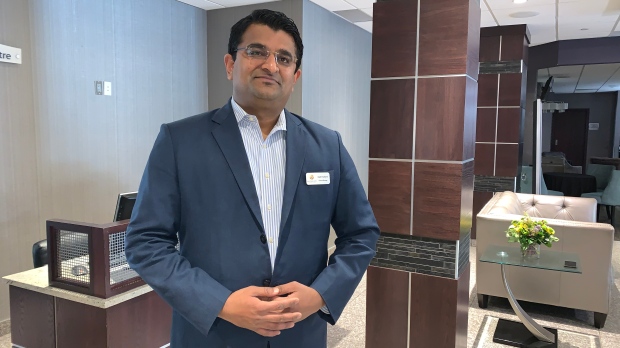 How to report self-isolation violations

The province has created an online form to report a person or business is suspected of being in non-compliance with Public Health Orders.

Complainants must provide their full name and number. Anonymous reports will not be addressed, according to the form.

Facing questions about why the federal government has yet to release comprehensive national projections on the scale of the virus’ spread and how long it’ll be before Canadians can expect a return to some sense of normalcy, Prime Minister Justin Trudeau said that information is coming “soon.”

Trudeau continues to implore Canadians to stay home if they want to come out of the pandemic sooner rather than later, saying there are still too many people going out unnecessarily, to the detriment of front-line workers.

The prime minister said he will talk to the premiers about making sure all data coming from each region is aligned, to inform more accurate federal models.

The province has shared some new information about flights landing in the city carrying COVID-19 cases.

Air Canada flight AC 8582 from Calgary which landed on March 21 had been previously identified on the province's COVID-19 flight-tracking website.

Originally passengers in sitting rows 10-16 were asked to self-isolate, now that recommendation has been expanded to cover any passenger who was seated in rows 3-16.

Another flight has been flagged as well, West Jet WS 0323 which arrived from Toronto on March 17. Passengers seated in rows 7-21 are being instructed to self-isolate.

On Wednesday the province said  a third person has died  in Saskatchewan from COVID-19-related complications.The victim was between the ages of 80 and 89, the province shared no other details.  Saskatchewan had nine new, confirmed cases of COVID-19, bringing the provincial total to 193.

The Saskatoon area continues to have the highest concentration of known cases, with 94 individuals as of Wednesday who have tested positive for the virus.

Mayor Charlie Clark and other community leaders sent a letter to Premier Scott Moe  asking for increased support  for the city’s homeless community and greater cooperation during the COVID-19 pandemic.

A University of Saskatchewan (U of S) student has started an online petition asking the school to take a  different approach  to final grades during the COVID-19 pandemic. 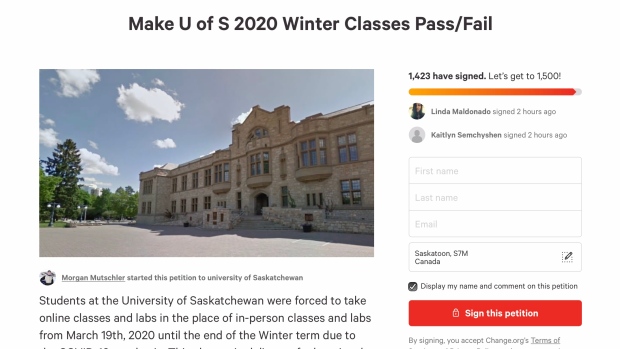 A Saskatoon restaurant owner says she’s on board with restaurateurs receiving financial help if they need it during the COVID-19 pandemic - but also believes the industry needs to adapt to a new way of operating.