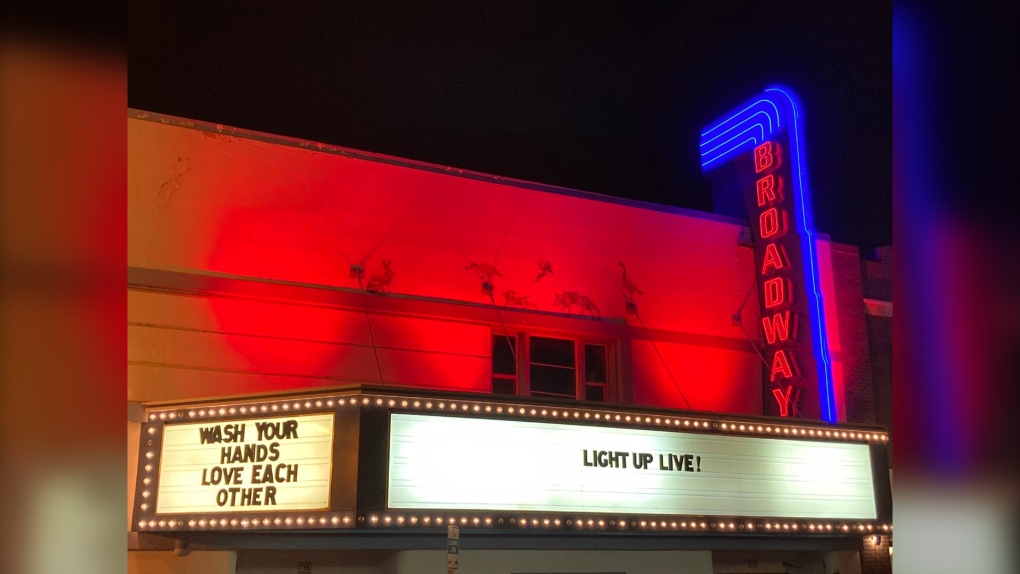 Broadway Theatre lit its building to raise awareness of the toll COVID-19 has taken on the business. (Twitter)

SASKATOON -- On Tuesday, live performance venues across the country lit their buildings in red lights as part of the “Light up Live” campaign.

In Saskatoon venues such as the SaskTel Centre, TCU Place, Remai Modern, Broadway Theatre and Shakespeare on the Saskatchewan participated.

The goal of “Light up Live” was to bring awareness to the impact that COVID-19 has had on the industry.

Live venues in Saskatchewan were closed in the beginning of the pandemic and are not yet allowed to reopen at full capacity.

“According to the rules we would have been allowed to open in July, but for what purpose? Nobody would come,” said Wirchenko.

The closures have affected businesses and performers but have also affected show-goers as they are missing out on the performances that bring their community together.

Wirchenko said the Broadway Theatre’s whole business model is to bring people together — something it is not able to do right now.

“Quite frankly I think the most important thing that’s lacking is if people don’t have a chance to get out of their house and see something or be a part of something that’s a little bigger than a Netflix screen, and that actually engages them with their neighbours or community or their friends – what’s the point?

Wirchenko believes that because of the closures, the Broadway Theatre similar venues will not be able to open to full capacity for a couple years and won’t go back to what they were financially in 2019 for a long time.

“I think the live industry is going to be in limbo and/or fall away for a minimum of six and a maximum of 18 months,” said Wirchenko.

Wirchenko hopes that “Light up Live” will bring the live performance industry more visibility as many venues across Canada have had to close their doors permanently.

“In Canada right now over 60 live music venues have already closed permanently and that’s just the ones I know about,” he said.

The Broadway Theatre will hold its first live show on Friday but will only open to 22 per cent capacity.