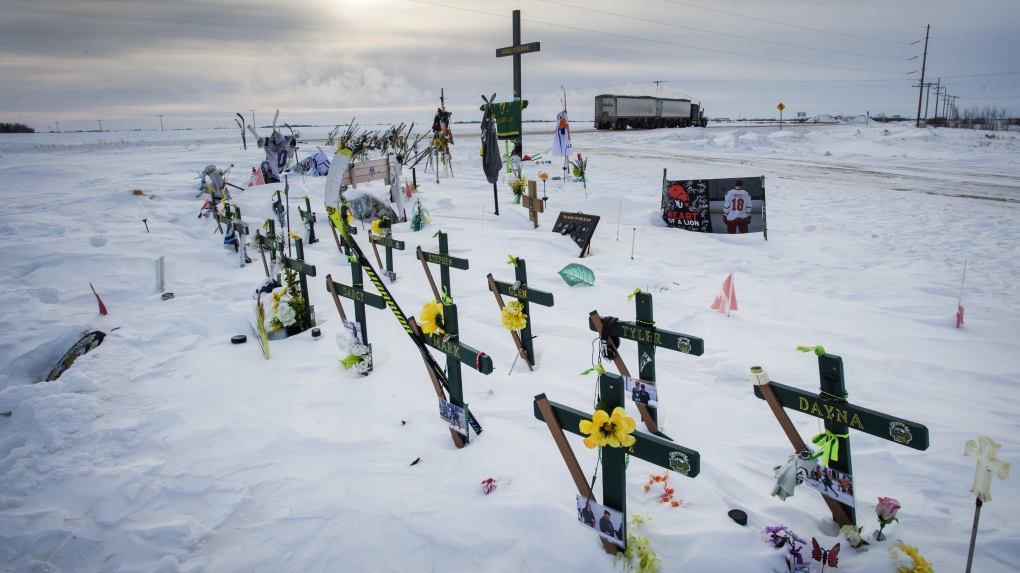 A memorial for the 2018 crash where 16 people died and 13 injured when a truck collided with the Humboldt Broncos hockey team bus, is shown at the crash site on Wednesday, January 30, 2019 in Tisdale, Saskatchewan. THE CANADIAN PRESS/Ryan Remiorz

SASKATOON -- The Saskatchewan Coroners Service has released a plan detailing the steps it will take in emergency situations involving multiple deaths.

“We had sent one coroner and an assisting coroner to the scene,” said Weighill about the 2018 crash that killed 16 people and injured 13 others.

“It certainly played out very quickly that one person can’t coordinate working at the scene, trying to deal with the families, setting up a morgue, getting transportation for the decedents. It’s just too much for one or two people to do.”

The plan shows that one coroner would oversee other coroners assigned various tasks. It also outlines the roles and responsibilities of the Coroners Service, paramedics, firefighters, RCMP and funeral homes, to name a few.

The document states that the Mass Fatality Plan will be activated when the chief or deputy coroner believes normal operating capacities will be exceeded.

“Our coroners know how to respond now and what the layout will be when they get there, and by the layout, I mean how they will act and liaise with the other units that are there,” said Weighill.

He said the plan is short so that it’s an easy guide in emergency situations, which include transportation accidents, extreme weather, structural collapses, mass shootings and terrorist attacks.

Eric Kennedy, assistant professor of emergency management at Toronto’s York University, said provinces can take a more detailed approach or a more concise approach like Saskatchewan’s plan. Neither is right or wrong, he said, but the best plan is one that’s updated over time.

“The best kinds of emergency plans are living documents. We often talk in the field of the problem of a good plan or a good incident review that is great when it’s put together, but then it ends up on a shelf and all it does is collect dust,” said Kennedy.

“A good emergency plan is one that you’re often picking up, you’re reviewing it, you’re asking questions.”

After the Broncos bus crash, coroners mixed up the identities of two of the players, one who survived and one who died.