'Cleanliness and dignity': Sask. program fights stigma by providing tampons and pads to girls and women

SASKATOON -- On International Women’s Day the United Way is hoping to get the word out about its program, Tampon Tuesday which aims to improve access to feminine products for girls and women who need them.

"Menstrual hygiene and period poverty is a global issue which does include Canada and our province and our city. People forget that. We often don’t like to look in our own backyard and see the real issues,” Andrea Howe, Director of Labour and Community Impact with the United Way told CTV News.

The Saskatchewan version of the program started five years ago and has gained support in that time with over 10,000 products like tampons and pads being delivered since it started.

Howe says, while many don’t like to talk about menstruation, it’s a reality that impacts the lives of girls and women.

“Many individuals miss school and work due to this. It’s definitely an issue of health, but more importantly, it’s an issue of the comfort of cleanliness and dignity,” she said.

Howe said she’s heard of situations where “girls in our own community resort to using socks, paper towel, plastic bags and newspaper in place of hygiene products.” 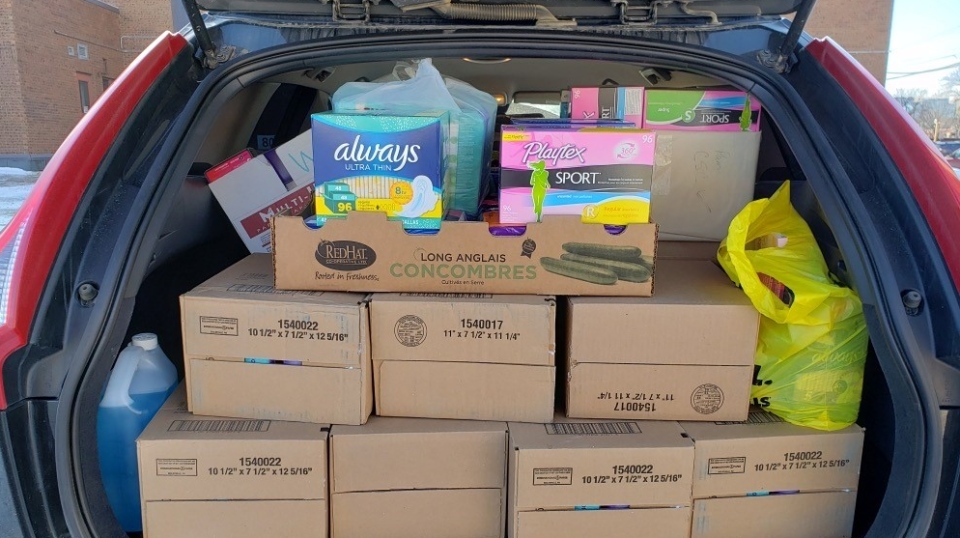 The United Way delivers the products to places where women and girls need them like schools and shelters.

Tanya Wiggins is the executive director of Interval House, a Saskatoon women’s shelter for those who are fleeing an abusive situation. She says there is still a stigma associated with asking for feminine hygiene products and if a family can’t access them, they will go without.

“It was one of those things that you didn’t really think about it until it became an issue and you’re like 'Wow, this shouldn’t be an issue.' This shouldn’t be something that we have to figure out how to do. Every person deserves to have access to that,” Wiggins said.

hen they arrive so that they don’t have to ask for them.

Interval House can house up to ten mothers and 21 children at a time, but that is cut in half with COVID-19 restrictions. Having the donations delivered for residents takes one more thing off the shelter's plate according to Wiggins.

“They have so many obstacles and barriers to overcome and trying to figure out how they’re going to access or afford products needed, that shouldn’t be one of those barriers they face, they have enough.”

She says, just being able to say, "Tampon Tuesday" is freeing.

“It’s been a topic that’s hidden and much like domestic violence. It was often behind closed doors, but yet it’s a normal part of life. Women get periods and it’s part of life,” she said.

Wiggins said the program has collected almost 2000 packages of feminine products in 2020 and so far this year, the response seems higher than other years.

She does say that the need has also increased with more people out of school and incomes affected by the pandemic.

Her hope is that one day, feminine products become available free to all who need them and are viewed as a basic necessity.

Donations or cash are being collected throughout the month of March.