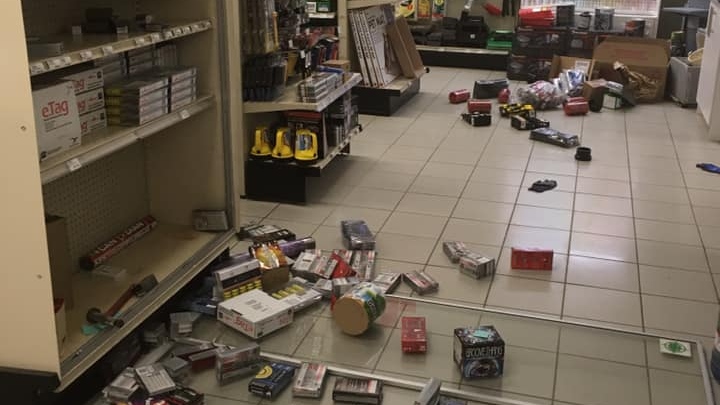 RCMP responded to a break-in at the Hafford Co-op on Oct. 24. Photo by Riley Baker

SASKATOON -- With a broken glass-door and merchandise scattered on the ground, the Hafford Co-op, 95 kilometres northwest of Saskatoon, is cleaning up following a weekend break-in.

At around 4:20 a.m. on Oct. 24, Hafford Co-op general manager Devon Fendelet said he woke up a call from his alarm company, telling him the store was broken into.

”I went down there and the local RCMP was basically right with me when I got there,” Fendelet said. "The front door had been smashed and pried open, so the local officer went in to make sure everything was safe, then I went in.”

Fendelet said it looked like thieves took everything in the cigarette cabinet, fireworks, ammunition and then went through and ransacked the store, Fendelet said.

He said that once the RCMP were done collecting evidence they went to work to clean the store, getting ready to open back up on Monday.

”We’re one of the only local businesses in the area and stuff so just to be up there for our members and everything, we wanted to be going as quickly as possible,” Fendelet said

In a post to social media, one of Fendelet’s employees mentioned that another business was also robbed by who he believes were the same people, Fendelet heard something similar from the RCMP

”The RCMP had mentioned to me that another business in the Shell Lake area had been hit after us,” Fendelet said.

RCMP have no said if charges have been laid in relation to this matter.