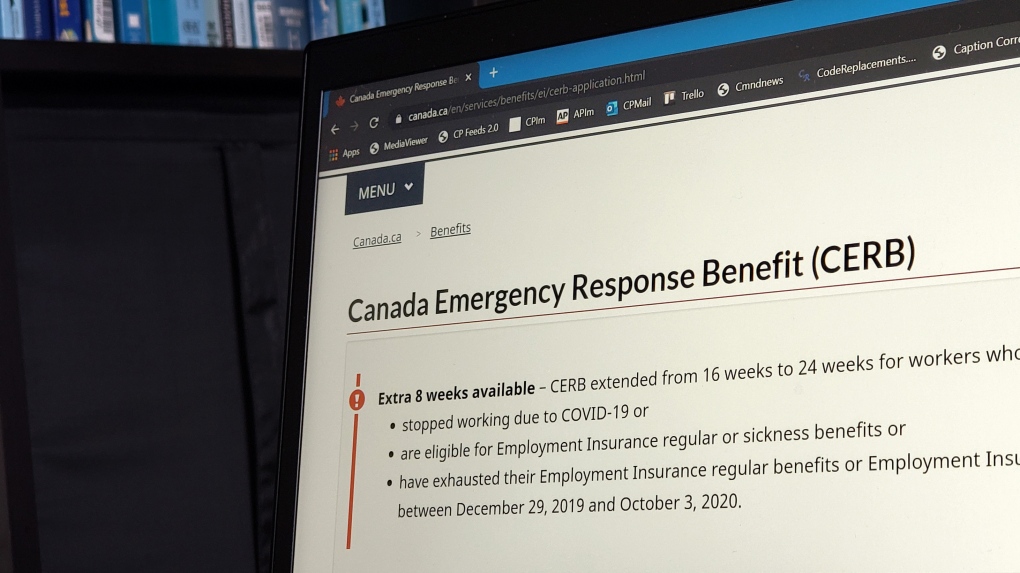 The landing page for the Canada Emergency Response Benefit is seen in Toronto, Monday, Aug. 10, 2020. THE CANADIAN PRESS/Giordano Ciampini

SASKATOON -- A Saskatoon woman says she’s kicking herself for applying for CERB benefits that cost her social assistance.

“I knew I shouldn't have done it, but it was there. And it did help out a lot. But now the consequences I have to deal with.”

She had not lost income due to the pandemic, but her neighbours were applying and she decided to as well, she said.

“A few people were telling me it’s OK to apply for CERB. I thought, once I get it it’ll help a lot, because I need a lot of things for my home.”

CTV News has agreed to a request by the woman to remain unnamed.

She said she later felt it wasn’t right and told her social worker she had applied for CERB. That’s when she learned the federal benefit would be counted as income and that it would affect her social assistance payments.

“I was scared I was going to get caught, everybody was saying that you’re going to go to jail, so I ended up ratting myself out.”

Now she worries about how she’ll pay rent and bills. The woman has three children and said she also won’t receive the money she expected for school supplies or bus fare.

The ministry added it will work with social assistance clients on a case by case basis to ensure basic needs are being met.

Instead of her normal monthly social assistance income of $1,500 the woman said she received $2,000 in monthly CERB benefits in June, July and August.

With the extra $500 she bought some fans for her house, and groceries, and clothes for her kids. She lives in public housing in Saskatoon.

She said her social worker told her she would have to hand in bank statements to show how she spent her CERB cash. She said she had never been asked for that before.

The CERB application was over the phone and she didn’t know the payment would affect her social assistance, she said.