Blood red moon to be visible Sunday night in Sask. during the lunar eclipse 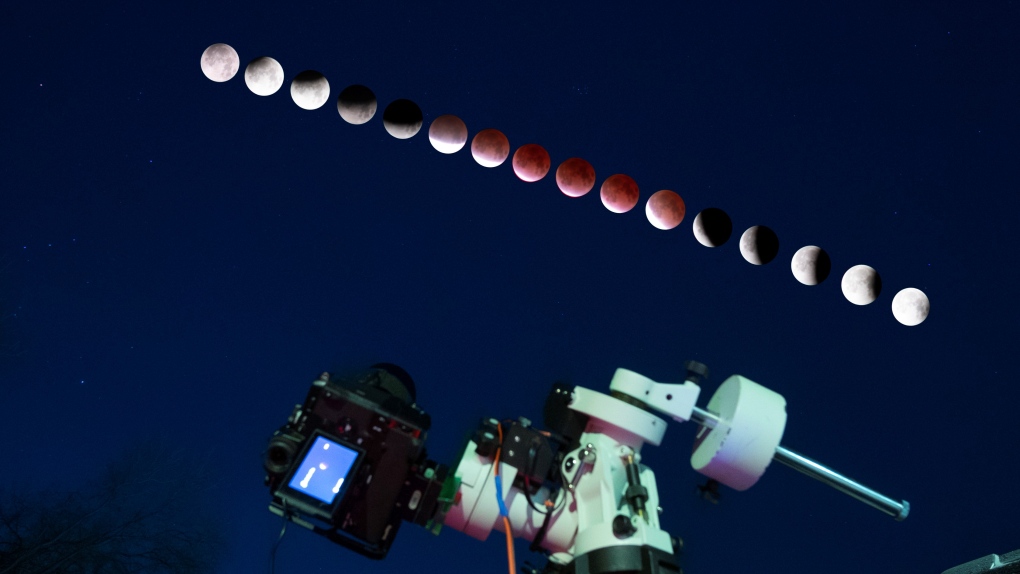 No special equipment will be needed to view the lunar eclipse. (Courtesy: Tim Yaworksi)

On Sunday night you’ll be able to get a glimpse of a blood-red moon on during the lunar eclipse.

“The lunar eclipse happens when we have three things lining up in succession; we have the sun, we have the moon, and we have the earth, but the earth is in the middle,” said Tim Yaworksi, a member of the Saskatoon centre of the Royal Astronomical Society of Canada.

“The earth is cutting the light from reflecting off the moon. So what's going to be happening is as it goes into that shadow, what we're going to start to see are chunks of the moon being eaten away.”

Yaworski says the phenomenon will be visible at moonrise, but after 10 p.m. is when things will get interesting.

“The moon itself, as it goes into that shadow, is going to turn a blood red colour, sort of a rusty, rusty red colour as it's fully engulfed in the earth shadow,” he said.

“Whatever light is sort of wrapping around the earth's atmosphere, basically stray light that's shining onto the moon. Now the reason it’s blood red is, the earth’s atmosphere basically acts like a big prism, and all it's letting through essentially is blue-spectrum lighting, which through the miracle of physics, looks red when it hits the moon.”

“This year in Saskatchewan we're going to have two full total lunar eclipses, you’ll be able to see one later in the fall, in November and this one here, so if you miss it you'll have another chance,” he said.

No special equipment will be needed to view the lunar eclipse, and unlike a solar eclipse, you’ll be able to look directly at it.

“You don't need any eye protection, you're not going to go blind, and if you miss the first 15 minutes of it, there's more coming,” said Yaworski.

“The other nice thing about a lunar eclipse is you don't necessarily have to be in a dark sky area. It's not like most things with astronomy where you want to be out away from the city where you do not worry about light pollution.”

Canadian Forces veteran James Topp marched through Ottawa on Thursday on the final leg of his cross-country march, and was joined by Conservative Party leader Pierre Poilievre for part of the walk.

The Supreme Court of Canada says the expanded rules to further prevent a sexual assault complainant's past from being used against them in a trial are 'constitutional in their entirety.'

Stocks are down, but here's why experts say you shouldn't panic

As stocks continue to slump, it can be easy to let your emotions take over if you've got money invested in the market. But experts agree that there's no need to panic if you're invested in the right type of portfolio with the right level of risk.

More than a month after Canada reported a shortage of baby formula for allergic infants, Health Canada says supplies will continue to be limited during the summer even with new shipments on the horizon.

An emergency room physician in Toronto is warning that COVID-19 variants will continue to 'mutate endlessly' as the Omicron subvariants BA.4 and BA.5 are poised to become the dominant strains of the virus.

A group of Quebecers is going to court to argue that Mary Simon's appointment as governor general should be invalidated because she isn't fluent in French.