Just before 1:30, Saskatoon Fire Department (SFD) received multiple 911 calls reporting a fire at a four-unit building in the 200 block of Camponi Place.

Rodney Calett lives in the building; he said he and his family were fast asleep.

"We just woke up and they're like 'your house is on fire,'" Calett told CTV News.

Once Calett, his mother and three sisters were safely outside, he said he could see "huge flames coming up over the top of the roof."

Upon arriving, firefighters began working to extinguish the fire while crews searched unaffected units to make sure there was no one inside, according to SFD.

By the time firefighters had arrived on scene, flames had engulfed the rear part of the building, SFD said in a news release.

After the blaze was brought under control, firefighters spent the morning monitoring for hotspots. The fire was declared extinguished at 8:48 a.m.

There were no injuries reported.

The fire was contained to two units in the building.

It caused an estimated $700,000 in damage, according to the department.

The blaze is still under investigation.

Ryan Wandler says he was woken up at 1 a.m. when he smelled smoke. He opened the front door of his apartment and said he saw flames wanting to come in.

Wandler says he lost everything in the fire.

‘It’s kind of hard to process right now … too many mixed emotions right now but the (valuables) are something you’ll never get back,” he told CTV News. 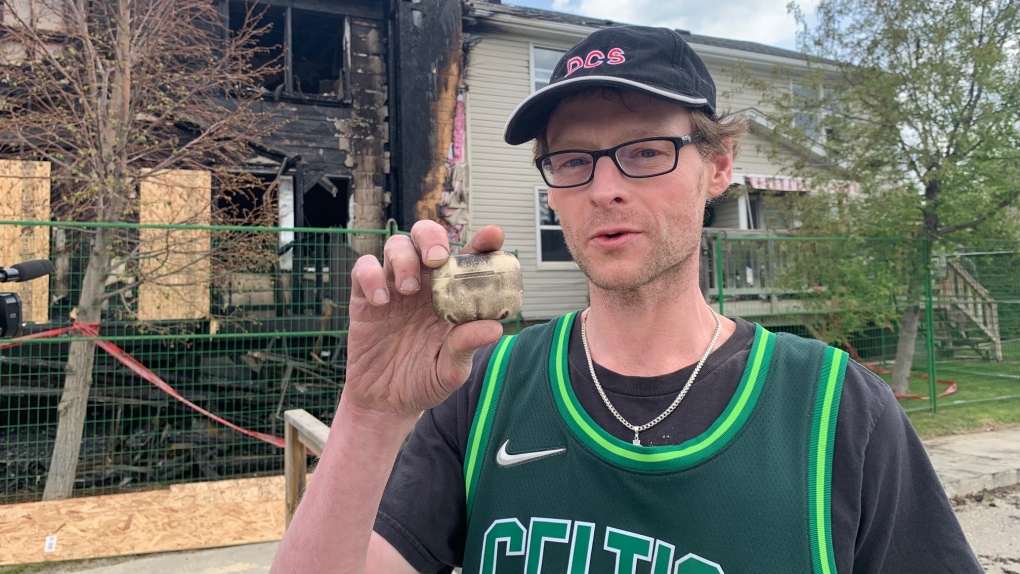 Wandler says he was able to walk through his unit with a fire inspector Tuesday morning and managed to find his AirPods which he says are his favourite and “couldn’t live without.”

Overall, Wandler says he’s glad no one was injured. He says he’s waiting for his insurance company to call and will be staying with his sister in the next few days.

“I’ve only been on one hour of sleep and yeah, it’s been hectic.”

--With files from Ryan Fletcher

In the wake of last year’s discoveries of unmarked graves at residential schools and the prominent displays of the Canadian flag during 'Freedom Convoy' protests, some Canadians are re-evaluating the meaning of the national symbol.

Prime Minister Justin Trudeau is calling on Canadians to recommit to the country’s values, including respect, hope and kindness, in his official Canada Day message.

'Not going to happen in our lifetime': First-time homebuyers share their struggles with purchasing a home

A recent survey shows nearly 50 per cent of Canadians who rent expect to do so forever. As rising interest and inflation rates contribute to a sense of pessimism among first-time homebuyers in Canada, some are sharing their struggles with purchasing their first house.

The Assembly of First Nations says an Ontario court has rejected a bid by National Chief RoseAnne Archibald to overturn her recent suspension.

'We have to build bridges': Canadian singer Chantal Kreviazuk on Ukraine, reconciliation

Moving toward reconciliation doesn't come from jumping 'the queue to perfection,' but by building bridges and trusting one another, Canadian singer-songwriter Chantal Kreviazuk told CTV News Channel during Canada Day celebrations in Ottawa on Friday.

A Russian airstrike on residential areas killed at least 21 people early Friday near the Ukrainian port of Odesa, authorities reported, a day after the withdrawal of Moscow's forces from an island in the Black Sea had seemed to ease the threat to the city.

The World Health Organization's Europe chief warned Friday that monkeypox cases in the region have tripled in the last two weeks and urged countries to do more to ensure the previously rare disease does not become entrenched on the continent.

One of Toronto’s Canada Day fireworks displays has been cancelled and another has been postponed after a vendor pulled out at the last minute.