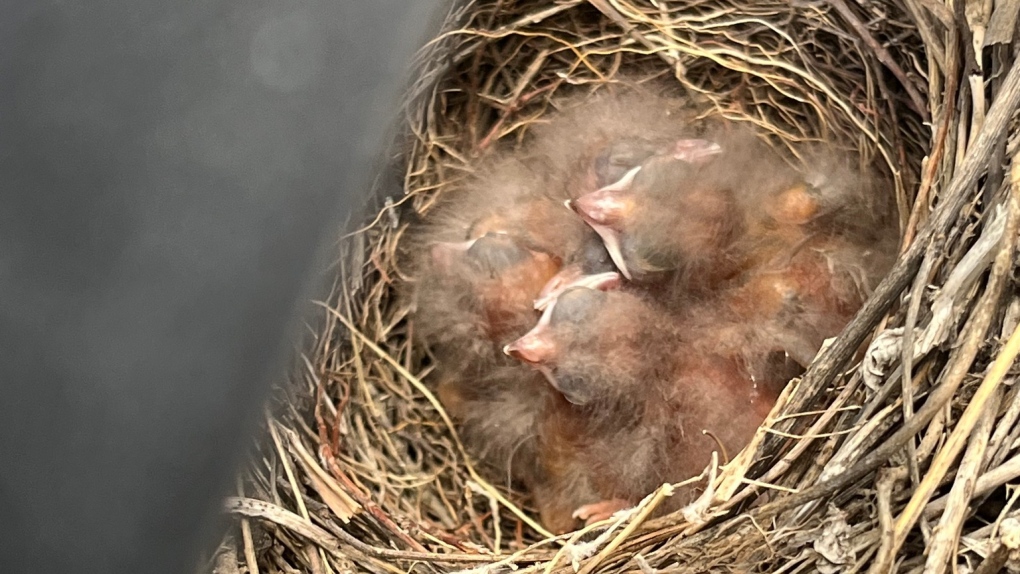 Judy and Mark Morrison were surprised to find baby birds in a nest hidden in their campervan. Courtesy: Living Sky Wildlife Rehabilitation Facebook.

A Saskatoon couple was surprised to find a bird's nest with baby birds still inside when they picked up their campervan for the summer.

Judy Morrison said she and her husband, Mark, store their campervan in an RV storage lot near Aberdeen and went to pick it up earlier this month.

“We drove out there and we went, looked in, and all these birds were squawking at us and everything. The first thing we thought was ‘oh, yeah. There must be a nest nearby somewhere.'"

Morrison said the couple checked over their vehicle and headed home.

“We got back to Saskatoon and we were backing our campervan into the driveway,” she explained. “I was outside guiding him so that he wouldn't hit anything. It's so hard to see it's such a long van.”

It was then she noticed something in the spare tire of the van.

“In between the back of the van door and our spare tire, which is on the outside of the van, I see these twigs sticking out."

She recognized it right away as a bird’s nest.

“I said I know why those birds were squawking. There's a nest in there.”

She said they decided to go to Living Sky Wildlife Rehabilitation with the birds because they were not up to driving back to Aberdeen and were not sure if the parents would accept the babies back.

“We drove over there and we took off the tire there and see it was just in perfect shape. The birds were still in good shape.

“If we wouldn't have backed up the van we would have just, you know, left it there and we would have never probably noticed that.”

“That was a beautiful place. It was hidden, and the crows really couldn't reach it. And it was lovely.”

Shadick said the birds in the nest were very young.

“They were like little tiny, itty bitty, naked things.”

She also said that only a couple of the babies have survived.

“When they're super, super tiny, sometimes it's really hard. The parents, when they pick up the bugs, they get a huge variety of different bugs. And of course, each bug has a little bit of a different set of minerals, vitamins and proteins and everything in it. And so, you know, we're a little bit more limited in the types of insects we can provide. So it's a little bit harder to replicate the diet.”

Shadick explained that sometimes mother birds would accept babies back, and sometimes they won’t.

“Some mothers, I think have been doing this a while and are kind of like ‘Sure I'll take them’ and other others can say ‘Oh, you've been gone for a day. I don't know who you are, and I'm not gonna take care.”