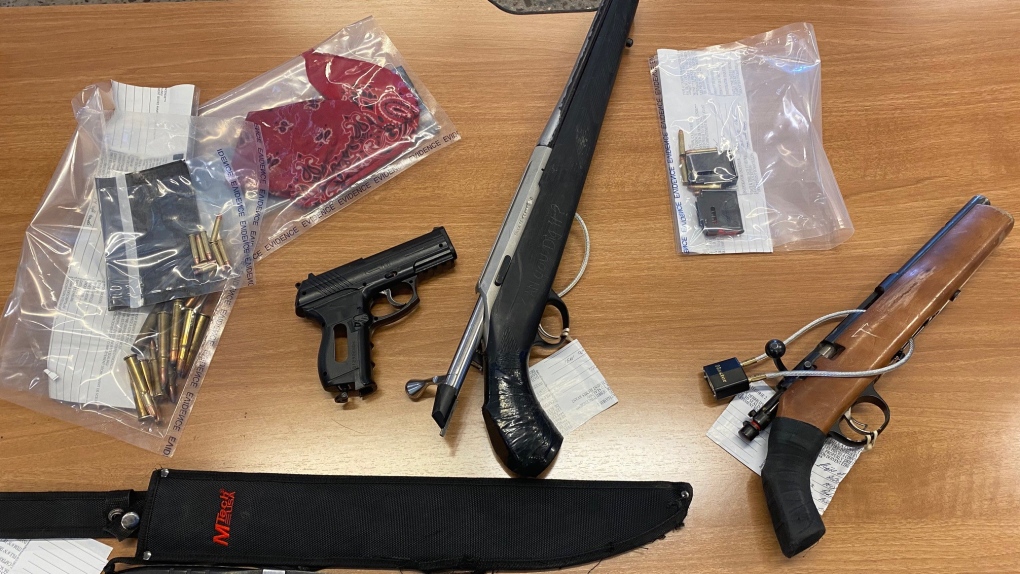 RCMP say they found one sawed-off modified rifle, ammunition, a machete, a BB pistol and several knives in an allegedly stolen car. (RCMP)

On Nov. 20 around 3 p.m., Maidstone RCMP received a report of a grey Honda car being stolen at a business in Lashburn by three males dressed in red. They were seen fleeing east on Highway 16 in that car followed by a small red Ford car.

Maidstone RCMP alerted the Saskatchewan RCMP Roving Traffic Unit (RTU), who was already on Highway 16 southeast of Lashburn, to be on the lookout for the stolen vehicle.

The RTU found it without the second red car. The RTU followed the Honda and flashed its lights to instruct the driver to stop but the car instead continued east, turned around and sped west on Highway 16, RCMP say.

While the Honda was being tracked, the Lashburn Fire Department advised Maidstone RCMP they received a report of a small red car on fire, east of Lashburn on Range Road 3250.

The Honda was seen travelling west on Highway 16, west of the Marshall Weigh Station, and then east on Kempton Road towards Highway 303. Eight police cars from various units spread out and patrolled an extended rural area around Lashburn.

Maidstone RCMP located the grey car near Paradise Hill, about 60 kilometres north of Lashburn, travelling west on Highway 3. They monitored its movements and observed it turn north on Road 797 in the direction of Frenchman Butte.

Shortly after, Maidstone RCMP radioed the new direction of the stolen grey car to Turtleford RCMP who were able to position themselves on Township Road 540 to deploy a spike belt.

Around 4:40 p.m., the Honda stopped, shortly after having turned onto Highway 21. Maidstone RCMP and Turtleford RCMP officers arrested all five occupants, three males and two females, without incident.

The five accused will remain in custody until they next appear in Lloydminster Provincial Court on Dec. 3.

Maidstone RCMP believes the small red car found on fire on Range Road 3250 is the same small red car that was seen following the Honda when it was being stolen. The investigation into the red car is ongoing.