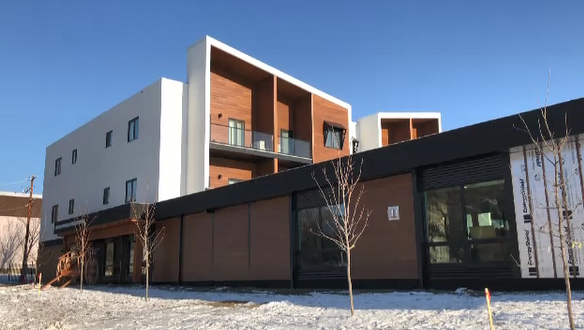 Marlene Conron, 72, has been living with her daughter for years and is one of the first residents to live in the Round Prairie Elders’ Lodge in Pleasant Hill.

“When you live with somebody, it’s not independence. They have their own rules and whatever… so this is gonna be great,” Conron told CTV News at the grand opening.

The three-story multi-unit modular building aims to solve the need for affordable housing. The building will have on-site social and cultural support, raised gardens for traditional medicines and picnic tables so people can gather.

Cultural elements, such as wooden ceilings, have also been incorporated into the design of the apartments.

The lodge cost nearly $6.9 million and was constructed in under eight months.

The plans for the 26 suite project have been more than two decades in the making.

Central Urban Metis Federation Inc. (CUMFI) president Shirley Isbister says the need from the community is enough for multiple lodges. One of the reasons she says the lodge had to be built in Pleasant Hill.

“This is going to be the heart of the community. We can make change. If we’re building new buildings, you know, a $7 million project in the core area, that’s great for the community,” Isbister said.

“That’s great for the community and that’s what we want. We want to be good community members and we want to look after our people.”

Conron says she knows several elders who will be soon moving into the lodge, including her own brother.

“He got hurt, one of his eyes. He’s blind in his one eye. He already bought loads of stuff and he’s going to be living right next door to me.”

Funding for the project was provided by the Indigenous Homes Innovation Initiative, Metis-Nation Saskatchewan, the Saskatchewan Housing Corporation, the City of Saskatoon and two loans.