‘A very gradual, ease-in approach’: What a Huskies football practice looks like during a pandemic 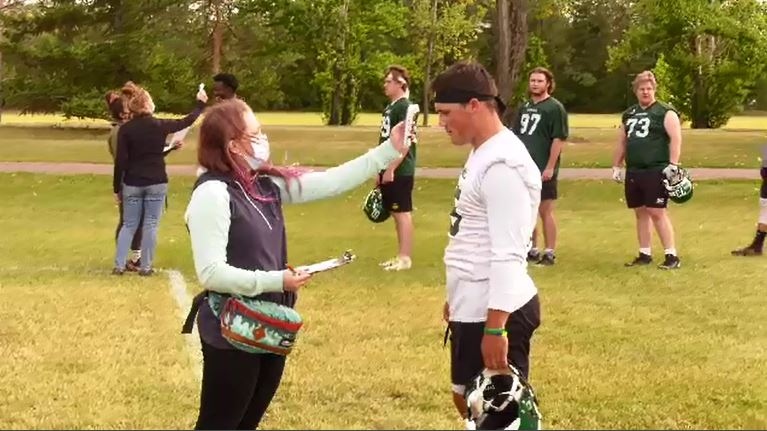 SASKATOON -- Huskies football players are experiencing a few changes to how they traditionally practice. Before hitting the field, everyone gets a temperature check. This week it’s no pads, just helmets.

“No contact or anything, no touching each other, it’ been different,” explained fifth year veteran receiver Colton Klassen. “But overall, right now, it seems pretty normal."

First year defensive back Finn Marcotte-Cribb wondered what practices would look like. After getting a few under his belt, he says it’s fairly normal, and he’s excited to be wearing a green-and-white jersey.

“At first I thought it was going to be kind of weird,” he told CTV Saskatoon’s Matt Young. “I just didn't know how it was going to work out, but now it's looking like it’ll be pretty good."

Many players have played little organized football this year, which is why Head Coach Scott Flory says they’re taking a gradual and steady approach to training camp.

"We've been off football for like six months, and we got one practice in, so really it's been 10 months since we've played football,” Flory said. “So we're taking a very gradual, ease-in approach to getting back into it.”

Flory says that means getting back to basics and working on a lot of individual fundamentals.

A big question for the coach - how do you keep a team motivated when there are no games scheduled on the calendar?

“Everyone is like trying to keep their spirits up,” explained Holy Cross product and rookie Seth Hundeby. “Coach Flory is motivating us. They say 'keep working.' So basically, as soon as we do have that competitive game, we'll be tip-top, super sharp.”

Klassen says the players are keeping a positive mindset.

"One of the things Flory is preaching to us right now is there is a light at the end of the tunnel. We've seen that in the last couple of weeks here, maybe even the last couple of months. I think that's all we’re kind of hoping for, just having that hope that things are going to get back to somewhat normal.”

The desire for competition has not changed either. Flory says they’re looking at ways to simulate the game experience.