A mysterious car in a Sask. forest has left people scratching their heads for years

A mysterious car in a Sask. forest has left people scratching their heads for years

There’s a discovery in the woods in Saskatchewan’s Lakeland that is anything but usual, in fact, it has some in the area spinning their tires trying to figure it out.

For those who have come across the mysterious antique car sinking into the forest floor – covered in moss and trees just off Highway 953 between Emma and Anglin Lakes, it has been a source of intrigue.

“You kind of get these questions like how it got here - whose was it,” Kenedee Siemens told CTV News.

She said it’s known to a few people in the area – the car that came to rest just behind some bushes about three metres off the dirt road.

“We were driving this highway to Waskesiu when my sister pointed out that there was something in the trees, so we turned around and came into the trees, and there’s a car here,” she said. 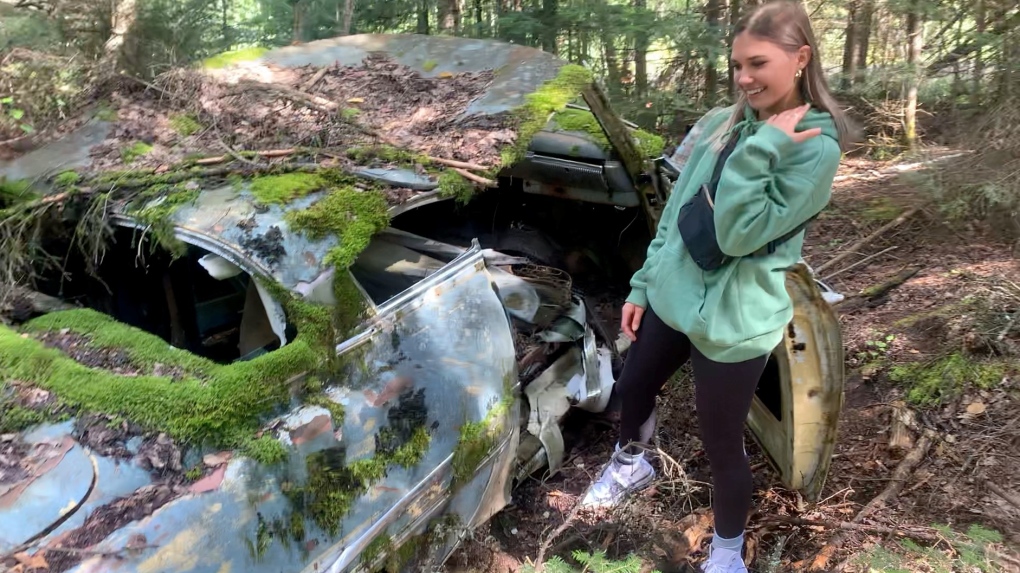 A mysterious antique car covered in moss and trees just off Highway 953 between Emma and Anglin Lakes has bullet holes, which has visitors surprised. (Carla Shynkaruk/CTV News)Cameron Graves and her family also have a seasonal site in the area, and she discovered it two years ago while exploring with friends.

“We just saw this car there and we were kind of confused because it’s in the middle of nowhere and it was surrounded by bushes,” she said.

There is an eerie feeling in the still forested area she admits.

“It was kind of scary to see a random car in the middle of nowhere there,” she said, adding she wondered if there was something more sinister like a body inside. Graves remembers feeling uneasy during that first visit.

That doesn’t keep her away though. She’s drawn to the discovery over and over each year.

Both Graves and Siemens admit they come up with their own stories about the car based on details they see, and there’s something they are drawn to.

“Definitely the bullet holes in the car itself,” Siemens said.

“Maybe it was even part of a crime scene from long ago,” Graves wonders.

“It’s really interesting that it sat there that long,” Scaddan told CTV News estimating the car has been in the same spot for about 50 years.

“In the north country, it’s really quite amazing you can find lots of old cars in the bush and you wonder how they got there because ... they’re really hidden away,” he says.

Scaddan can offer some insight into the type of car it is based on the photos.

“The first clue that I got was there’s a taillight and I went oh that’s a 53 Chevy taillight and once I have the clue, I looked at the other pictures and I can piece together that it’s quite an individual and rare car it’s a 53 Bel Air two-door hardtop from the best that I can see it,” he said.

Scaddan confirmed that this car was one of Chevrolet’s most luxurious cars of the time.

“This two-door hardtop would be the second-most expensive car, so the fact it would end up there is a bit of an oddity.”

He’s also fascinated by the story of how it got here and what adventures it went on.

“That car was somebody’s pride and joy in 1953 and who else had it and how much of the essence and energy of the people that own the car is still hovering around. It’s just a very interesting thing,” he said.

Siemens and her family visit the car at least once a year and share the discovery with friends and family. They’ve seen changes over the years, including a guest book that was once inside the car in a Ziploc bag with signatures that is now missing.

“There used to be a steering wheel in here and now it’s gone also,” she said.

The hope is that those who visit it, respect the 70-year-old car, and let it continue to age gracefully into the future “rusting in peace.”

Oscar, Golden Globe and two-time Grammy winning singer-actress Irene Cara, who starred and sang the title cut from the 1980 hit movie 'Fame' and then belted out the era-defining hit 'Flashdance ... What a Feeling' from 1983's 'Flashdance,' has died. She was 63.

The World Cup action in Qatar continued with Tunisia, Australia, Poland, Saudi Arabia, France, Denmark, Mexico, and Argentina all playing. CTVNews.ca takes a look at everything you need to know from Day 7 of the tournament.

Fleeing shelling, civilians on Saturday streamed out of the southern Ukrainian city whose recapture they had celebrated just weeks earlier as the country remembered a Stalin-era famine and sought to ensure that Russia's war in Ukraine doesn't deprive others worldwide of its vital food exports.

Canada is importing more children’s medication amid an unprecedented surge in demand, but the head of the Ontario Pharmacists’ Association warns that the supply will still need to be rationed if it’s going to last.