SASKATOON -- The threat posed by a deadly pandemic that afflicted other parts of the world may have seemed distant and abstract early last year. That all changed on March 12, 2020. Here is a look at the first 48 hours of COVID-19 in Saskatoon.

"As a front-line family physician in Saskatoon, I have to beg you to cancel," she said on Twitter.

"The people coming for Junos will undoubtedly bring it to us. Don’t cripple our healthcare system for an awards show.”

Dear #Junos2020. As a front line family physician in #Saskatoon, I have to beg you to cancel. Saskatchewan has no cases now. The people coming for Junos will undoubtedly bring it to us. Don’t cripple our healthcare system for an awards show. @cityofsaskatoon @TheJUNOAwards

The tweet came the same night the NBA had made the high-profile decision to suspend play indefinitely and U.S. President Donald Trump banned travel from Europe to the U.S.

The week began with an assurance from health officials that Junos, last held in the city in 2007, could go ahead safely.

But early in the morning the city announced the cancellation of the event.

"We are devastated to cancel this national celebration of music," a joint statement sent by the City of Saskatoon said.

"At this time of global uncertainty, the health, safety and well-being of all Canadians must stand at the forefront of any decisions that impact our communities."

Soon after the announcement came another: the first presumptive case of coronavirus had been identified in Saskatchewan.

A 60-year-old Saskatoon man who recently travelled to Egypt had tested positive for the virus.

The Roy Romanow Provincial Laboratory did not yet have the ability to confirm COVID-19 test results so the man's sample was forwarded to the National Microbiology Laboratory in Winnipeg for confirmation.

The man was well enough to self-isolate at home, the province said at the time.

Rumblings of a spring election in Saskatchewan were also put to rest on March 12 in a tweet from Premier Scott Moe.

"We will remain focused on providing a strong, stable government and addressing the health and economic challenges caused by the COVID-19 pandemic," Moe said in the tweet.

We will remain focused on providing a strong, stable government and addressing the health and economic challenges caused by the COVID-19 pandemic.

I will not be calling a provincial election this spring.

Meanwhile, mirroring a trend seen in other areas of the world affected by the pandemic, stocks of certain items dwindled in the city's supermarkets, hardware stores and even convenience stores.

Toilet paper, which had become emblematic of the steps some were taking to prepare for a possible self-quarantine, appeared to be the biggest seller.

A note hanging from empty shelves at Sobeys in Stonebridge read: “Due to the sudden record-breaking increase in demand for toilet paper, we are currently out of stock on ALL varieties of toilet paper.” 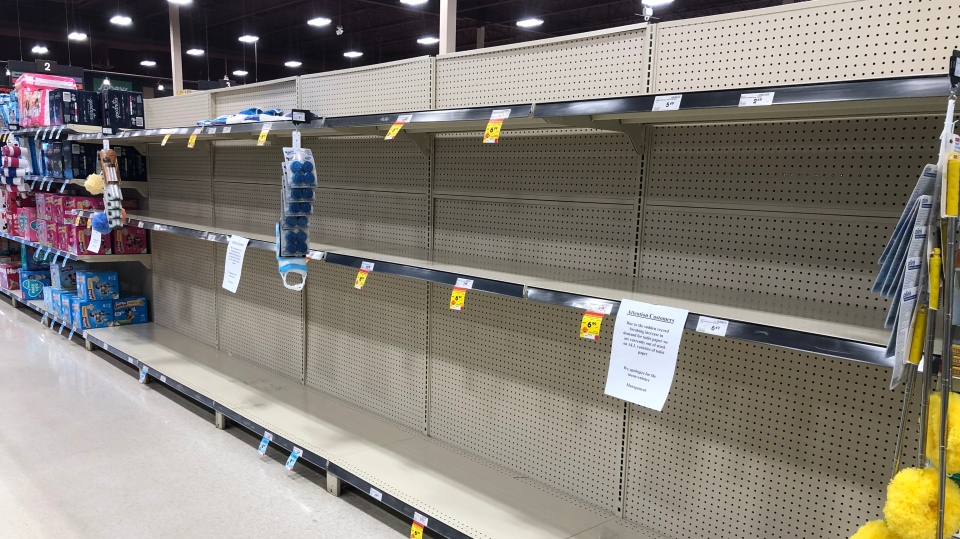 Chief Medical Health Officer Dr. Saqib Shahab, at the time a name not widely known in the province, said anyone who was experiencing symptoms should contact Healthline 811 for advice and possible referral for testing.

The telephone-based health care service would struggle in the coming days to keep up with the huge volume of calls coming in concerning COVID-19.

March 13: 'We have been preparing'

The morning of March 13, in an interview with CTV News, Saskatoon Mayor Charlie Clark urged calm.

"We're really making sure we're getting advice from experts and wanting to be really diligent about how we approach this," Clark said.

With the total shutdown of many non-essential businesses nearly two weeks away, Clark encouraged people in the city to support the local economy.

"We want you still to go out and support local businesses, go out and be in the community and do it with care and precaution. Wash your hands, cough into your sleeve and stay home if you're sick," Clark said.

The man, in his 60s, had traveled from Oregon. He was also deemed well enough to self-isolate at home, according to the province.

While stricter rules were yet to come, the province also fired the first salvo in its battle to limit the disease’s spread.

Shahab banned public gatherings of more than 250 people in any one room.

The ban didn’t include settings where people are distributed into multiple rooms or buildings, such as schools, universities or workplaces.

Restrictions would tighten throughout the year, with private gatherings being banned entirely over Christmas, with exceptions only for people living alone.

At the time, Opposition Leader Ryan Meili, who is a family physician, called for further steps to get ahead of the pandemic, including a public inventory of "key equipment" such as ventilators and oxygen machines to help treat acute cases of the illness.

Around the same time as Meili's news conference, shoppers again were out en masse.

Long lines could be seen snaking through the city's Real Canadian Superstore location on Eighth Street East as shoppers stocked up on items. 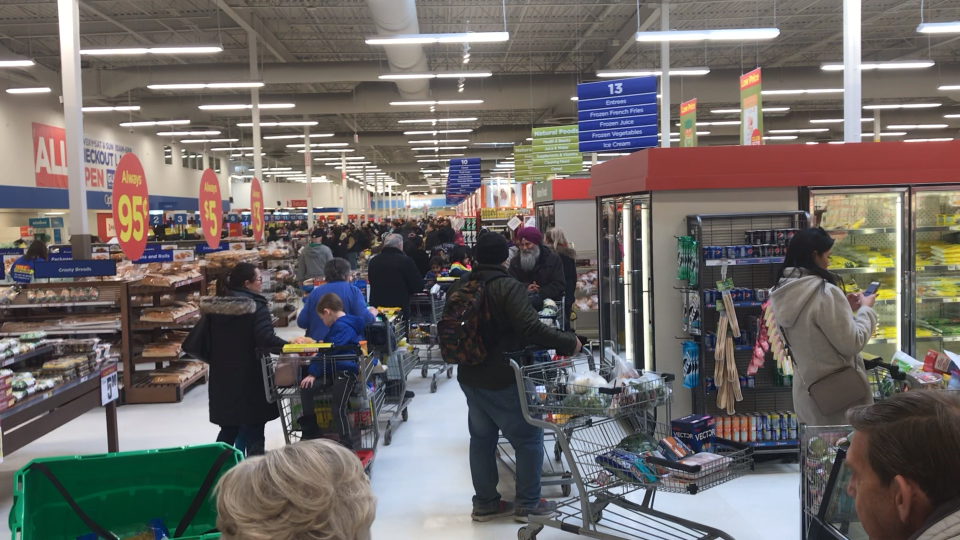 The Federation of Sovereign Indigenous Nations worried the arrival of COVID-19 in Indigenous communities would be “disastrous” in close-knit First Nations, communities distant from hospitals and supplies.

The FSIN asked the federal government for sanitization supplies and COVID-19 tests to be delivered to remote communities.

The FSIN's concern proved warranted as Indigenous communities in the province's north were among those to be hardest hit by coronavirus early on in the pandemic.

Late in the afternoon on March 13 came news of one of the first of many high-profile closures and cancellations. The University of Saskatchewan announced classes would be temporarily suspended starting the following Monday and all courses will shift to remote instruction by later in the week.

The health authority had also reportedly doubled the capacity of its 811 HealthLine after a four-fold increase in call volumes strained staffing resources and technological infrastructure.

The scope of the COVID-19-related cancellation of the Juno Awards came further into focus.

Tourism Saskatoon's vice president estimated the loss to the local economy could be in the neighbourhood of $9 million. 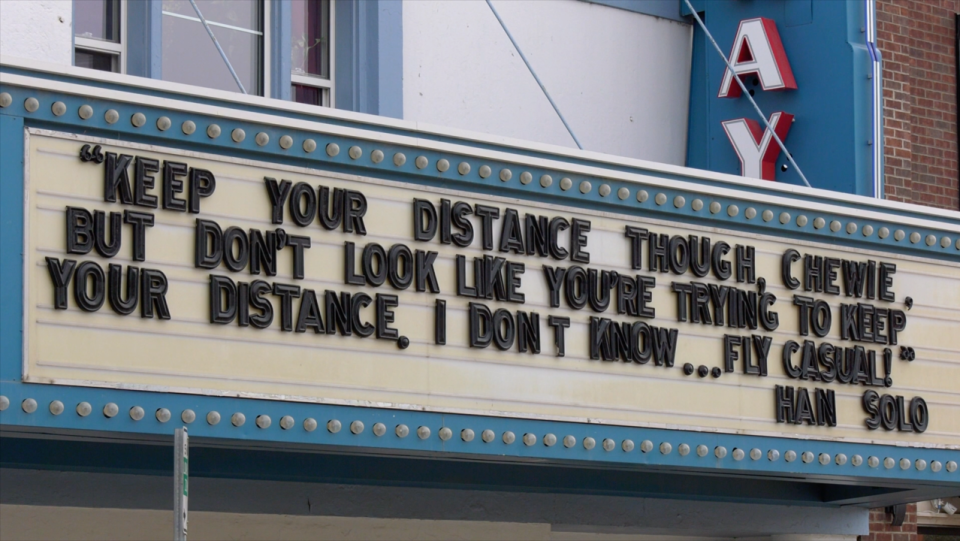 "We're just starting to understand what that looks like and have really no concept of the mass impact that it will have," Stephanie Clovechok told CTV News at the time.

Just one of many ways the city would feel the effect of the pandemic over the coming year.